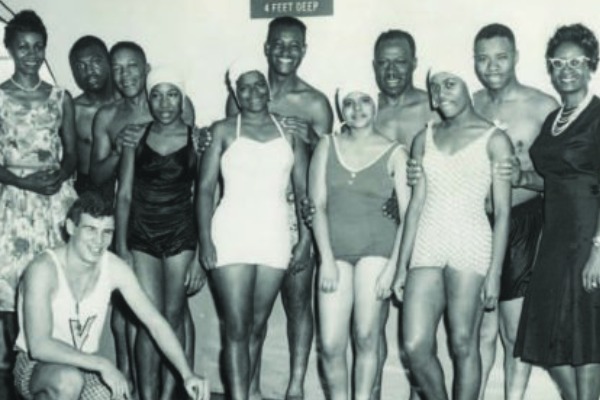 A new exhibit coming to Philadelphia will explore the experiences of swimming while Black as it relates to America’s history of segregated swimming.

Located in the former Kelly Pool within the National Historic Landmark Fairmount Water Works, “Pool: A Social History of Segregation” (POOL) takes a deep dive into the history and effects of segregated swimming in America.

Opening September 3, POOL looks into the role public pools played as it relates to the connection between water, social justice, and public health in America.

Racial discrimination at swimming pools is still something that plagues communities across the country and has led to a significant impact on the Black community. The segregation as lack of funding from public pools has resulted in what has become a stigma on Black people and swimming.

The POOL exhibit, inspired by “Contested Waters: A Social History of Segregation” by Jeff Wiltse, traces the history of the public pool and access to water and how it helped build resilience within the African American community, as noted by WHYY.

It will educate guests on how deeply skilled swimmers people within the African Diaspora were before 20th-century restrictions started blocking their access to recreational water.

A historical timeline that stretches along the pool room’s exhibit wall explains that in the early 20th century, public pools were open to all races and were segregated by gender. By the 1930s, swimming was a number one pastime for Americans and pools became coed. But once it became a realization that Black men and White women might share the same water, it made way for racial segregation.

“This project is a natural extension of our mission to educate the public about the important role of water in our daily lives,” said Karen Young, Executive Director of the Fairmount Water Works Interpretive Center. “Visitors can contribute to a conversation about issues of equality and social justice–all central to global issues around water.”

FacebookTwitterYoutube
← Former R. Kelly Employee Testifies He Made Girlfriends Fight Each Other As Punishment ← Tyler Perry Claps Back At Critics Who Dog Him About The ‘Bad’ Wigs on BET’s Drama ‘Sistas’
×