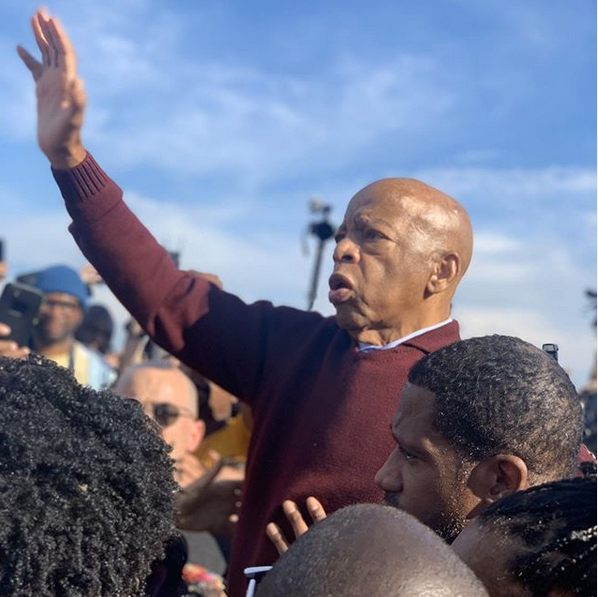 Image: Instagram
Angela Stanton-King was recently pardoned by President Donald Trump after her 2004 conviction on federal conspiracy charges for her role in a car theft ring. After spending more than two years in prison, she found herself in the Oval Office, praying over Donald Trump with a handful of black Trump supporters. Now she has her eyes set on Rep. John Lewis‘ congressional seat,
The author and former reality show star announced on Friday that she will run for Congress as a Republican against longtime Georgia Democrat and civil rights activist Rep. John Lewis. “I have the utmost respect for the contributions that (Lewis) has made to black America,” Stanton-King told the Atlanta Journal-Constitution in an interview last week. “However, this isn’t the Selma bridge, and our babies are dying. It is time for war.”
Lewis announced in December that he was battling pancreatic cancer but said he still intends to run for the seat that he has held for 17 terms representing Georgia’s 5th district. “There is still much work left to do on guaranteeing civil rights to all people in this country, protecting and expanding access to healthcare, and ensuring that every American can freely cast a vote regardless of race or resources,” Lewis said. “With the support of my constituents, I look forward to getting into more good trouble in the years ahead.” He has also been a staunch critic of Trump calling his presidency illegitimate.
Stanton-King claims her campaign is less about replacing Lewis and more about taking action for the issues she cares about. She wrote on Twitter that she is “Pro GOD Pro LIFE Pro WOMAN Pro AMERICA Pro TRUMP and PRO COMMON SENSE” and included the American flag emoji.

Lewis will also be running against Barrington Martin who is running as a Democrat.