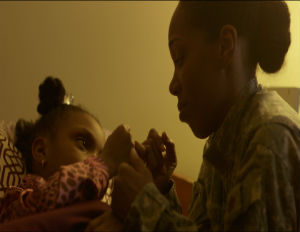 At this year’s 19th annual American Black Film Festival (ABFF) in New York City, McDonald’s debuted their brand new McDonald’s Lovin’ Video Competition as an opportunity for aspiring filmmakers to create a 90-second to two-minute videos showcasing what ‘Lovin’ meant to them.

Three finalists from all across the United States attended ABFF to premiere their videos while competing for a chance to win $2,500 in film equipment, and be mentored by critically-acclaimed film director, Malcolm D. Lee (Best Man; Best Man Holiday). The winning filmmaker also had the opportunity to feature his/her film on several media outlets including McDonald’s 365Black.com and BlackEnterprise.com.

The winner of this year’s Lovin’ competition was budding filmmaker Richard T. Fields, for his video, Puppy Love. BlackEnterprise.com had the chance to catch up with Fields to learn more about his experience as the winner of this competition and to hear what more he has in store.

BlackEnterprise.com: What was the inspiration behind your Lovin’ short video?

Fields: I read the competition prompt, and the images that you see in the video are the first things that came to mind. All of those images were drawn from different personal experiences in my life. I was raised as an only child so I understand that experience. My mother had a job where she spent a lot of time traveling, so growing up I spent a lot of time with my grandmother. That aspect of the storyline is directly personal. My father is a military man so that’s where the military aspect of the piece came from.

How was it being mentored by Malcolm D. Lee?

It’s really hard to put into words, but in short, it was an amazing experience—just to talk to him and hear about how he got started. There are a lot of the commonalities in his story and what I’m going through right now. We both went to film school and went through M.F.A programs. He was around my age when he was finishing up his degree program and beginning to write feature screenplays before he started making Best Man. That’s where I am right now–writing my screenplays and venturing into making more films.

What did the experience of winning the competition mean for you?

Winning was really just motivation. The timing of me winning couldn’t have been any better. I was in my last semester of my M.F.A program for film school when the competition was announced. When I won I was about a month out of school. This project was the first project that I did on my own without any professor supervision. I built a team on my own. I had to write, direct, and edit on my own. Winning was a good tool for motivation that said ‘hey, you’re actually kind of good at this. You can do this. There is an audience out there for you.’ Winning pushes me to keep going and continue to try new things.