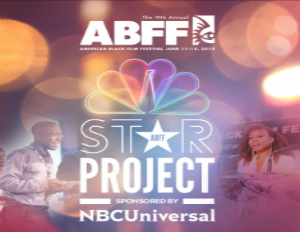 NBC Universal is looking for its next superstar through the American Black Film Festival’s (ABFF) Star Project, a competition designed to provide opportunities for actors and actresses of color. By working with ABFF, NBC hopes to open the door to more diversity in Hollywood. “Diversity is good business. We’ve learned through demographic research that audiences for TV and content are changing and expanding. Our population is changing, and we need to reflect that on screen,â€ says Jandiz Cardoso, NBC Universal’s manager of talent development programs and inclusion. “We love ABFF. It’s been a long standing relationship. We feel they make a wonderful impact in the community and act as a sort of hub that welcomes and encourages artists, not just directors and writer, but also actors. So we’re doing our part trying to contribute.â€

Actress Kimberly Dalton says her career received a boost after winning last year’s competition. “After the Star Project and working with NBC, I was able to secure my dream managers. I did a recurring role on Days of our Lives, which was just incredible. And it’s just been an ongoing thing since then,â€ says Dalton, whose episodes of the soap air in March. “The star project has totally spring boarded a lot for me in 2014. And it’s gotten me hyped for 2015. Â I would tell the future generations of Star Project [actors] to work on those monologues. Don’t just submit. I spent a few weeks preparing. Do it.â€

Last year was Dalton’s first time attending ABFF, which came after a recommendation from 2013’s Star Project winner Vladimir Versailles. “Winning ABFF’s Star Project has enhanced my career in a number of different ways because it exposed me to a lot of different relationships and industry professionals who wanted to invest in my career,â€Â  Versailles says. “It was a good jolt of steam to boost the credibility of an actor who’s been pounding the pavement and working in the trenches for some time now. Winning that award was like God reminding me that I can play with the big boys.â€

Winning thespians are chosen after submitting taped monologues that are judged by a panel of casting experts. Those who make it to the next round are chosen to perform in front of NBC executives live at ABFF. “I’m looking for someone who is a professional and hardworking in the craft, perhaps from a background that has been encouraged as a performer–a background trained in theater or performance art,â€ Cardoso says. “And they [must desire] to make that transition to TV. We’re not just looking for actors based in Los Angeles or New York. We want to reach out to those regions that don’t have frequent opportunities.â€

With past winners including one of its most popular, 2010’s Emayatzy Corinealdi , star of Ava DuVernay’s Sundance award-winning film Middle of Nowhere, actors that have won the Star Project continually stress its importance. “The Star Project in my opinion is the most important aspect of the festival because it exposes the audience to talent they may not have known otherwise,â€ says actor Stephen Hill, who won along with Corinealdi in 2010. “Breaking new talent should be the cornerstone of any festival but especially a black film festival, since African Americans are underrepresented in our film industry to begin with.â€

The deadline to submit to the Star Project is March 20. Visit ABFF.com for more information.