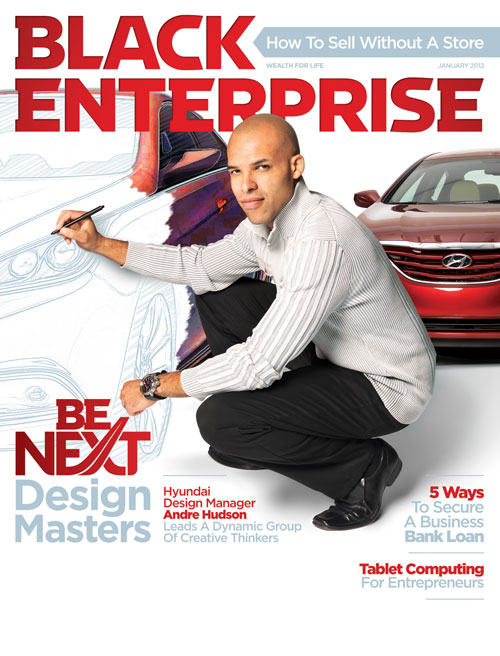 The importance of good design transcends all industries. Whether it’s your mobile device, the clothes or footwear you wear, or the interior of a building you’ve entered, “great design changes the world,â€ says cover subject Andre Hudson. Marveling at how Hyundai’s top design manager and his team engage in the eight-month process of car design during my visit to the Hyundai campus in Fountain Valley, California, brought his statement to life for me.

I was awestruck by how his automotive creations start out as a sketch on a sheet of paper that is then transformed into a 3-D model using the Alias software program. From his office I could see designers creating life-size models using clay that is shaped and molded using a heat gun. This process is how he created the 2011 Hyundai Sonata.Â  Although much of the tour was top secret–we were only allowed access to parts of the building using sensors that read Andre’s thumbprint–I lived in his remarkable creative universe for a day. Firsthand, I witnessed how design steers innovation. Who would have thought that a kid from Colorado who used to sketch cars on his school papers could channel that passion into developing one of Hyundai’s best-selling vehicles?

What also excites me is that as members of BE Next–outstanding professionals and entrepreneurs between the ages of 21 and 35–Hudson and others represent the emerging leadership of global business. Their example motivated me to produce this article because design has increasingly become critical in companies large and small. A product’s design can make a lasting connection with consumers, brand a vast array of products, and drive significant revenues.

In the cover story, “Driven by Design,â€ I profile a new cadre of innovators using their talent and vision to position industries for a 21st-century environment that heavily relies on creativity of thought, production, and execution. These qualities are on display in the profiles of Hudson and the other four subjects. Natischa Harvey applied her skills to fashion, expanding a small shoe boutique into an international business. Another, Jason Mayden, has taken design to the max–producing digital design solutions for Nike apparel and retail operations. Twin brothers Teman and Teran Evans have used their degrees in architecture to create a blueprint for entrepreneurial advancement through their own interior design firm and jewelry line as well as roles as brand consultants for Starbucks Coffee Co. and some of the country’s largest luxury retailers.

It’s hardly an overstatement to say that such imagination is required to assume the advantage in a hyper-competitive world. And these subjects all serve as appropriate models for an issue in which BE Editor-In-Chief Derek T. Dingle charged us with finding professionals and entrepreneurs, especially at the early stages of their career, not only thinking out of the box, but redesigning it.Â  Other features in this issue–such as “Selling Without a Store,â€ which offers entrepreneurs inventive, new venues to build businesses and generate revenues, and “Create Your Own Recovery,â€ with its focus on self-directed financial and career reinvention–tie into this same theme.

The designers that I had the privilege of interviewing will serve as catalysts for this revolutionary thinking. In terms of designing business leadership, they got next.