Activist Tamika Mallory Does Not Hold Back On Daniel Cameron 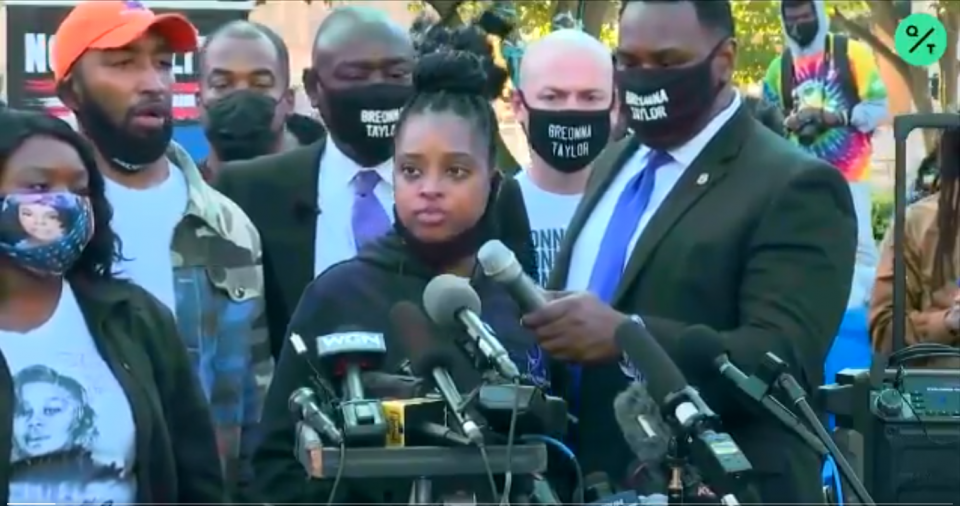 “That is who you are Daniel Cameron,” Mallory screamed. “You are a coward, you are a sellout and you were used by the system to harm your own mama. Your own Black mama.”

Cameron announced last Wednesday that only one of the three officers who fired shots into Taylor’s home would be charged. Former officer Brett Hankison has been charged with three counts of wanton endangerment for shooting into the apartments of Taylor’s neighbors, the night of March 13.

Cameron did say at the press conference that many people would not be happy with the result.

“I know that not everyone will be satisfied,” Cameron said last Wednesday. “If we simply act on outrage there is no justice–mob justice is not justice…Do we really want the truth? Or the truth that fits our narrative?” Cameron asked

Mallory, a co-founder of the women’s March On Washington and Until Freedom, continued to fire shots at Cameron and his lack of commitment to Kentucky’s Black community.

Ben Crump, the attorney for Taylor’s family, also spoke on Friday and called on Cameron to prove he tried to get justice for Taylor.

“If you did everything that you could do on Breonna’s behalf, you shouldn’t have any problem whatsoever, Daniel Cameron, to releasing the transcript so that we can see you fought for all of Kentucky citizens, especially including Tamika Palmer’s daughter, Breonna Taylor,” Crump said. “Release the transcript.”

Cameron said last week that he would not release the Grand Jury transcripts because the situation was still under investigation by federal authorities. However, according to The Daily Mail, a juror says they were never given the option to indict the two other cops involved in Taylor’s killing and that Cameron misrepresented the case.

As a result, Jefferson Circuit Judge Ann Bailey Smith has “ordered attorneys to file a recording of the grand jury proceedings” by Wednesday, according to an NPR report. Still, it’s not clear when the recording might be released to the public.

Mallory also brought up that the decision on Taylor’s case came on the same day as one of the most brutal murders ever committed on a Black man.

“Now, I don’t know if it’s just that Daniel Cameron is stupid or that he is very, very, very clear about history and made a decision to wait six months and come forward with this announcement,” Mallory said. “This garbage that we received on the exact same day that Emmett Till’s family received the same result.”