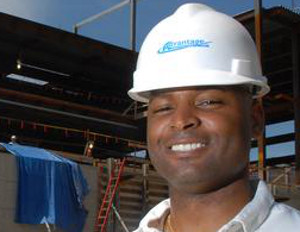 PresidentÂ of Advantage ContractingÂ Bill CromedyÂ accepted an award from the SBA for the 2013 Minority Small Business of The Year yesterday inÂ Philadelphia. The award was presented by NBC 10 anchor Tracey DavidsonÂ inÂ Philadelphia.

Advantage Contracting, Inc., is a fully insured and bonded HVAC/sheet metal contractor. The company specializes in the fabrication and installation of sheet metal ductwork primarily used for heating, ventilation and air conditioning in various commercial and industrial applications and provides HVAC equipment for both large and small project needs.

Advantage Contracting employs 20 people and is the only minority sheet metal company in PhiladelphiaÂ and in February became an 8a certified small business.

Cromedy and Advantage Contracting have worked projects such as the tallest building in Philadelphia, Comcast Center. He was chosen as the winner out of a potential 700,000 business candidates in the region.

“I am honored by my nomination byÂ Tania FlemingÂ of Milestone Bank as well as extremely humbled by my ultimate selection as the winner of this award amongst my peers,” Cromedy said at the award ceremony which wasÂ hosted by the SBA. “As a young entrepreneur I very lucky to have support not only from my family and friends, but ultimately my banking institution, Milestone Bank which has been a steadfast supporter in bringing my vision for my firm to fruition.”