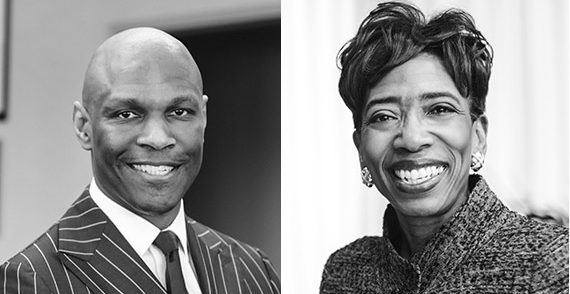 It may be the first time that two African Americans received this award in the same year. Carla A. Harris, vice chairman at Morgan Stanley; and Christopher B. Howard, the president of Robert Morris University, are the recipients of Harvard Business School’s  (HBS) Alumni Achievement Award.

According to HBS’ website, the award is given to “distinguished graduates [who] have contributed significantly to their companies and communities while upholding the highest standards and values in everything they do. As such, they represent the best in our alumni body. Exemplary role models, they inspire all those who aspire to have an impact on both business and society.”

Harris is not only one of the most powerful black executives in corporate America, she’s written two books on success and has a website dedicated to her gems of wisdom, or Carla’s “pearls,” as she calls them.

The author of Expect to Win: Proven Strategies For Success From a Wall Street Vet and Strategize to Win: The New Way to Start Up, Step Out, or Start Over in Your Career, Harris has given hundreds of speeches and interviews about the keys to getting ahead, whether it’s about finding your voice, leveraging your authenticity, or attracting a sponsor. She was a featured speaker at this year’s Black Enterprise Entrepreneurs Summit where she spoke on the topic of why being good at your job isn’t good enough. She has been a fixture on Black Enterprise’s most powerful corporate executives list.

Howard, an Air Force veteran, is the eighth president of Robert Morris University. As per HBS’ website he “grew up in East Texas, a region that he, the great-great-grandson of a slave, observes, “wasn’t necessarily the most racially progressive place in 1969.” The second son, he was born while his father was serving in Vietnam. His parents were both the first in their families to go to college. They met in high school, where his mother was the class valedictorian and his father was the salutatorian.”

He attended the University of  Oxford as a Rhodes Scholar and earned master’s and doctoral degrees. Howard founded a non-profit organization, the Impact Young Lives Foundation, which provides travel and educational opportunities for South African students of color.