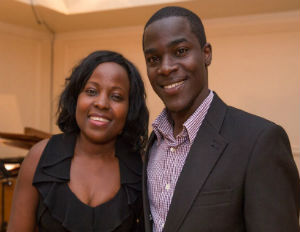 In mid-May, African Dream Initiative held an innovative fundraiser, a Night of African Flavors featuring tastings from several New York-based African restaurants. Flavorful aromas wafted through the air from small plates of delicious fare on various tables around the room, inviting guests to taste freely. That evening, Clare Karabarinde, a founder of ADI who is originally from Uganda, spoke to the gathered crowd.

“Education makes the difference,â€ said Karabarinde. “Every time I go to visit my grandmother, my relatives, the difference between me and them–same family–is education.â€

A successful New York attorney and chairman of ADI’s board, Karabarinde described her cousins, who, having little formal education, live a more traditional lifestyle: They married young and have very large families. Little education and lots of children do not equal a life of privilege for such women, says Karabarinde. “Women without an education who are not independent are at an extreme disadvantage in a male-dominated society like Uganda,â€ she says. “If your husband dies, that’s it. You are not protected. You don’t own any property. So now you’re homeless with six children.â€

ADI invests in disadvantaged children that show leadership potential and academic promise. Based in Uganda, the organization helps young people from the age of 8 to attend the country’s most prestigious schools, and gives them the support they need to excel.

ADI’s mission is not only to invest in these children, but to instill in them the drive to in turn give back to help lift their communities. Started in 2010, the organization has a record of success: In 2012, eight of nine ADI high school graduates were accepted to prestigious universities; two were awarded a full government scholarship, which is reserved for Uganda’s top performers. Its high school graduation rate is 94%. ADI provides not only academic support, but because many of its scholars have been affected by catastrophes like war, homelessness, and AIDS, the organization also provides counseling.

From Child Laborer to Scholar

Paul Ntege, an ADI student, is a rising sophomore at Trinity College in Connecticut and a winner of the prestigious MasterCard Scholarship, which provides full tuition for four years of university study. He is also a former child laborer who, with his older brother, worked in a rock quarry to pay the school fees for primary school. He also spoke that evening. “People go down into the rock quarry, gather the rocks, carry them up on their shoulders, head, or whatever to pull them up. Then they break them in pieces, put them in heaps, and sell them off,â€ Ntege said, recalling his experience.

Because Uganda has a three-term school system, Ntege and his brother took advantage of any school holidays to work in the quarry. The money they earned would pay either the previous term’s fees or the fees for the next term.

Ntege and his brother were two of the top students in the school and were written about in a national newspaper. That’s how ADI found out about them.

“ADI reads the article and decides it must meet these two students. These are the kind of students we’re looking for. So they approach us. I remember vividly they came to the quarry where we were working.â€

He and his brother have now been ADI students since 2006; his brother will be graduating this year. Ntege studies electrical engineering and intends to give back to his community in some way after he graduates, to sustain the ADI mission of creating a cycle of success. He has gone back to Uganda to visit and seen other children working just as he used to. “It hurts me to see those kids still working in the rock quarry. They are just like me. They are motivated and need to be given an opportunity.â€

The Night of African Flavors fundraiser was a success. It raised more than $30,000, enough to fund 16 students’ participation in the program (including tuition, room and board, school supplies, books, medical care, clothing, transportation, and leadership workshops) for a full year.