Alice Barker Reacts to Watching Her Younger Self Perform 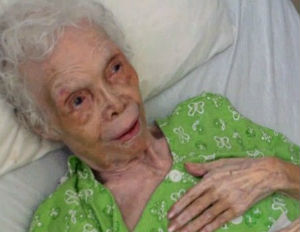 “It don’t mean a thing, if it ain’t got that swing,â€ a nostalgic, Duke Ellington lyric, recalled by 102-year-old Alice Barker, as she watches her younger self dance of film, in the 1930’s and 40’s, for the first time, via an iPad brought to her by David Shuff.

According to ABC News, Baker was a chorus line dancer during the Harlem Renaissance, and performed for night clubs and ‘Soundies,’ which were short musical films, similar to today’s music videos.

“She danced at clubs such as The Apollo, Cotton Club and Zanzibar Club, with legends including Frank Sinatra, Gene Kelly and Bill “Bojangles” Robinson,” the video’s description adds.
In the video Barker can be seen tapping her hand along to the familiar music, she appears delighted to revisit those moments in her life.

“It’s just fabulous, fabulous to see these and remember all these things,” Barker says in the video. “I used to often say to myself, I am being paid to do something that I enjoy doing, and I would do it for free because it just felt so good doing it because that music you know? I get carried away in it.”
Baker says watching the video made her wish she could get up out of bed and do it all over again. When asked how many years she danced, Barker laughs and replies, “That’s all I ever did! That was it!”

The video was filmed last fall by David Shuff, who used to bring his therapy dog to the center before he moved to California, he told ABC News.

“I became good friends with Ms. Barker,” Shuff said, adding he’s known her for almost seven to eight years. “Gail Campbell, a recreation worker there, and I thought it would be fun to find her films even though we thought it was impossible.”

After some thorough searching, Shuff said he got in contact with jazz film collector Mark Cantor, who owned films of Barker in his archive called “Celluloid Improvisations.”
Shuff then showed the films to Barker, and got permission to upload her reaction on YouTube, he added.