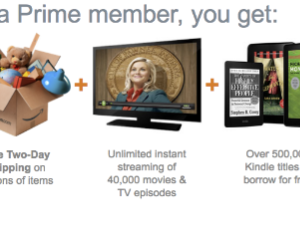 Amazon's Prime service has been expanding from two-day shipping into offering services like instant video and a lending library for Kindle owners.

Amazon Prime, the online retailer’s subscription service, is going through a price hike.
The 25% increase is being justified by Amazon as a countermeasure to the increase in fuel costs associated with delivery of its over 20 million products available through Amazon Prime’s two-day shipping service.

It’s also mentioning its introduction over the past nine years of several services associated with Prime.

The services include its extensive catalog of over 40,000 movies and television episodes through Prime Instant Video, a Netflix-like service, and the over 500,000 books available through the Kindle Owners’ Lending Library.

According to the Wall Street Journal, Amazon may also debut a Spotify-like music streaming service for Prime subscribers.

The move wasn’t unexpected, as Amazon did mention it was considering raising the subscription fee by $20 to $40 in January.

Also increasing by $10 is Amazon Prime for Students, going from $39 to $49. The rate hike will not affect the $299 subscription to Amazon Prime Fresh, a grocery delivery service available in San Francisco and Los Angeles, California.