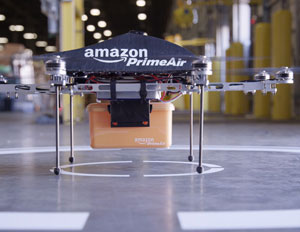 Amazon’s drones may be grounded in the U.S., but they’re already going international.

According to The Economic Times, Amazon could be expanding its drone delivery service, Prime Air, to India.

The reason? To break into the Indian online retail space that’s dominated by what could be seen as the Amazon.com of India, Flipkart.

With warehouses located in both Mumbai and Bangalore, India is a sensible place to begin rolling out its drone delivery service, especially due to the Federal Aviation Authority’s restrictions on drone use for commercial purposes. In India, the online retailer faces less regulation concerning drone use for deliveries.

The service is scheduled to launch before Diwali, a major Hindu festival in October that also functions as a shopping holiday. With Amazon using Prime Air as a marketing tactic, it gives the company a competitive advantage against rival online retailer Flipkart, which operates exclusively in India.