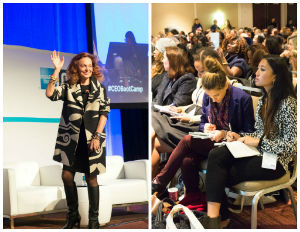 According to the State of Women-Owned Businesses Report, by American Express Open, between 2007 and 2013, female entrepreneurs started businesses at a rate 150 percent higher than the national average. Despite this being a time period where the economy and job market was facing tremendous struggles, female entrepreneurs added 175,000 jobs to the U.S. economy.

Recognizing the influence that social media has on a company’s brand, the CEO Bootcamp held a “Social Media Power Hour” and “Social Media Lab” sessions to discuss how social networking sites can either help or hurt your brand depending on how effectively they’re used. Hearing from female executives at Twitter, LinkedIn, Pinterest, Levo League and Likeable Media, the ladies talked about the importance of having a clear objective when promoting their brand online.

“The most important form of creating a brand is having a uniform voice,” said Levo League’s founder Ghosn in regards to using social media as the voice of your company. She says that when creating a social media profile for your company you should ask yourself about your values as a brand and who your competing brands are.

When it came to discussing how small business CEOs can use LinkedIn to elevate their brands, 5 points were outlined:

1. Create a winning profile that includes a great photo, a great headline and searchable key terms.

2. Stay informed on the latest news by following LinkedIn influencers.

4. Make your network work for you.

4. Know what’s working and what’s not in order to see how you can improve your profile.