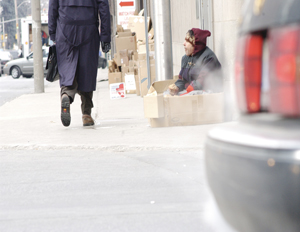 According to government data released earlier this week, the amount of poor Americans from 2010 to 2011 has remained steady.

This is a small triumph considering the increases in the percentages of poor Americans over the past three years.

These statistics, thankfully, do not reflect the decrease in the median income for most Americans from 2010 to 2011, which could have increased poverty. The amount of Americans with health insurance also declined between 2010 and 2011. This is another key factor that determines economic well being.