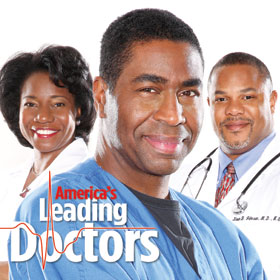 Mental health remains a critical issue in America. A recent study funded by the National Institute of Mental Health found that major mental disorders cost the nation at least $193 billion annually in earning potential. We have identified the leading practitioners among more than 1,500 black psychiatrists who have handled the toughest mental health cases related to, among other conditions, phobias, eating disorders, depression, schizophrenia, and substance abuse. In selecting America’s Leading Doctors in the area of psychiatry, we used the following criteria:

_ All physicians are leaders in the area of psychiatry.

_All were confirmed as being certified (as of March 21, 2008) in accordance with the American Board of Medical Specialties, a nonprofit organization that helps 24 approved medical specialty boards in the creation and use of standards in the evaluation of doctors.

_We did not include physicians who are retired, who are engaged purely in medical research, who no longer treat patients, or who are no longer affiliated with the medical profession.

_We have identified these psychiatrists by consulting leading physicians, top-ranked medical schools, and organizations such as the Black Psychiatrists of America and American Psychiatric Association.

Started as the black caucus of the American Psychiatric Association, the Black Psychiatrists of America was founded by a handful of African Americans in 1967. They felt a need to address problems that weren’t receiving much attention from the mainstream organization.

One of the founders, Dr. James P. Comer, later reached a startling personal conclusion. “Psychiatrists working with individual patients aren’t going to make the big difference for the black community,â€ says Comer, 73, the Maurice Falk Professor of Child Psychiatry at the Yale University School of Medicine’s Child Study Center. “A major part of the behavioral problems you see among African Americans are economic and political at [the] root.â€ Internationally known for creating the Comer School Development Program, his work gravitated toward helping African American and other marginalized children excel in academic and social settings.

Comer believes psychiatrists can and should play a vital role in helping people understand how negative political and economic conditions lead to behavioral and social problems.Â  Other top black psychiatrists view key issues related to their profession a bit differently. “The greatest challenge is reducing the disparities in access to care, especially newer treatments, for African Americans. The second biggest challenge is combining the paradigm of culture with the current focus on human genetics,â€ says Dr. William B. Lawson of Howard University College of Medicine. Adds Dr. David Henderson of Harvard Medical School: “I think the greatest issue challenging black psychiatrists is the lack of clinical researchers and, more importantly, research dollars to conduct the appropriate studies in order to understand how to best care for black patients.â€