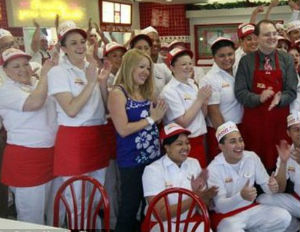 Lynsi Torres is a mere 30 years old, and known as the youngest female billionaire in America. The blonde-haired business maven owns In-N-Out Burger, a popular fast food chain craved by all along the West Coast.

According to Vibe.com, Lynsi’s “grandparents founded the first In-N-Out as a mom-and-pop drive-through burger stand in 1948 in Baldwin Park.â€ The young heiress took over the now billion-dollar franchise in 2010, and watched the business grow over the years far beyond the interest of the general public. In 2005, Warren Buffett told UCLA Anderson School of Business students that he would love to own the business.

Sixty years in the making, a young Lynsi has seen the benefits of a growing business, most recently purchasing a “7-bedroom, 16-bathroom mansion near the San Gabriel Mountains in September and is a competitor in National Hot Rod Association races, driving either a 1970 Plymouth Barracuda or a 1984 Chevrolet Camaro.â€