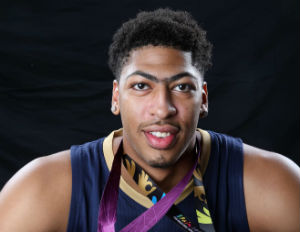 At just 22 years old, three-year NBA veteran Anthony Davis is about to sign the richest contract in NBA history. Due to league rules, he can’t sign until July 9th, but the deal will be well worth the wait. The agreement was made at a reported $145 million over five years, which would bring Davis’ average salary to roughly $29 million, and is set to begin with the start of the 2016-17 season, when the current NBA salary cap will have risen to a projected $89 million.

Davis’ resume is truly impressive; having already been selected to the NBA All Star game twice, as well as earning All-NBA First Team and NBA All-Defensive Second Team honors this year, it’s no secret around the league that Davis is the future. Additionally, he was a member of the gold winning 2012 Olympic team, and in integral member of the 2014 gold winning FIBA World Cup team.

Per stats collected by ESPN, Davis led the league last season in blocks per game averaging nearly three, while ranking fourth in scoring at over 24 points per game, and eighth in rebounding at over 10 per game – all while leading the Pelicans to their first playoff berth since 2011 [as the Hornets]. His Player Efficiency Rating of 30.8 was good for 11th all-time in terms of single-season PER, and the only players that have posted higher are Michael Jordan, Wilt Chamberlain, and Lebron James.

The Pelicans’ wasted no time making the offer to Davis, which reportedly came right after the midnight start of free-agency. Davis is currently playing on his rookie contract, which considering his current production and future earnings, offers the team a massive discount for the following year. Earning just over $23 million in the four years of his first contract, Davis will earn that much plus more each year until his 28th birthday. Per a Forbes report on the mega-deal, ‘salaries for players like Davis, who have less than six years experience, are typically capped at 25% of the salary cap. But there is a unique provision in the CBA, nicknamed the Derrick Rose rule, for players that outplay their rookie contracts. Rose was elected league MVP during his first NBA contract. Davis made the All-NBA first team last season and will be eligible for the 30% figure if he makes the All-Star team next season or is chosen for one of the NBA’s three All-NBA teams.’

It’s worth noting that this is only the beginning of the massive contracts that the NBA is set to experience going forward. As previously reported, the huge television and media rights contract that the league signed worth roughly $24 billion is going to significantly increase team salary caps, and as a result the size of players contracts.

Here are the previous largest NBA Contracts of All-Time:

Earlier today,Davis let the fans know that it was official and that he was in New Orleans to stay when he posted this picture to his Twitter account.

NOLA, I am here to stay! Just getting started… #6MoreYears #TakeFlight pic.twitter.com/Kni8WpikEA