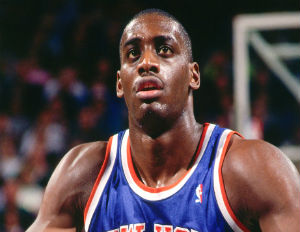 According to reports, Anthony Mason, a 13-year NBA veteran has died. The 48-year-old, 6-foot-7 forward was diagnosed with congestive heart failure earlier this month. The baller is best known for helping the Knicks reach the 1994 NBA Finals and teamed with star players including Patrick Ewing, Charles Oakley and John Starks.

ESPN further reports that one of Mason’s sons told reporters earlier this week that his father was “getting better” following multiple heart surgeries.

Mason, who was honored with the league’s Sixth Man Award in the 1994-95 season, has also played with theÂ Charlotte Hornets,Â Milwaukee Bucks andÂ Miami Heat following his stint with the Knicks.Â In 1997, he earned third-teamÂ All-NBA and second-teamÂ NBA All-Defensive Team, and in 2001 was selected for the NBAÂ All-Star Game.

Many sports fans, friends and family have taken to the Web to express condolences and remember his legacy:

RIP Anthony Mason! What a great power forward back in the day! WOW! #Sad https://t.co/TTl3shKsLQ

Wow, I can't believe this. So many great memories. A great Knick legend. Anthony Mason dies at 48 http://t.co/vNtCgxDOTD

R.I.P. Anthony Mason. The former Knicks forward has died at the age of 48: http://t.co/NZEg4yVQKR pic.twitter.com/WWVHUZxNLZ

Sad to hear of passing of former @NYKnicks Anthony Mason. Remember always running into Starks, Ewing & him in Phys Ed Bldg at @SUNY_Purchase

RIP #AnthonyMason. One of the greatest @nyknicks ever not because of numbers or commercials but… https://t.co/puLP9bSafT

So deeply saddened at the death of my namesake @nyknicks great #AnthonyMason. Mase was a wonderful guy. pic.twitter.com/pRXzM84h6q