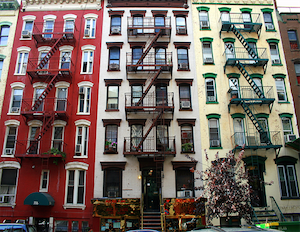 It’s no secret that New York City has an inequality problem. As more and more high-rise developments make their away across the Tri-state area, one particular resident is opening its doors to the lower rungs of society.

According to the New York Post, a “poor door” will be created at the new building coming to 40 Riverside Blvd., which will be separate from the wealthier occupants who live there. The alternate entrance will be explicitly for those who rent via affordable housing.

Extell Development Co., the firm behind the new building, made its intentions known last year and hasn’t backed down. Understandably, outrage has manifested from those who feel that the company and building aim to segregate the rich and poor. Fifty-five of the luxury complex’s 219 units will be marked for low-income renters–netting Extell some very valuable tax breaks—while the less fortunate would have to stick with their own entrance.

If you’re wondering how something like this could even go down, look no further than New York City’s Department of Housing Preservation and Development who approved Extell’s request. The status grants Extell and the 33-story tower tax breaks and the right to construct a larger building than would be ordinarily allowed. For the low-income residents, they will be required to enter through a door situated on a “back alley.”

“No one ever said that the goal was full integration of these populations,” David Von Spreckelsen, senior vice president at Toll Brothers, said. “So now you have politicians talking about that, saying how horrible those back doors are. I think it’s unfair to expect very high-income homeowners who paid a fortune to live in their building to have to be in the same boat as low-income renters, who are very fortunate to live in a new building in a great neighborhood.”

Do you believe these low-income renters have a right? Is it just? Speak on it in the comments section below.