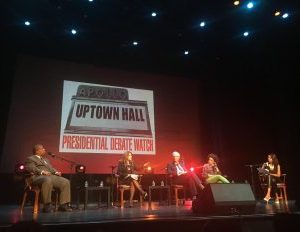 There was no better place to watch the highly anticipated presidential debate on Monday than at the legendary Apollo Theater in Harlem, N.Y., where the audience stayed true to their nature, laughing, cheering, and booingÂ throughout the night.

Before screening the debate,Â the audience at the Apollo Uptown Hall were welcomed to the theater with music provided by Hot 97’s DJ Enuff, live performances, and anÂ interactive panel discussion. The Diverse Concert Artists played a beautifulÂ symphony of “The Star-Spangled Banner.” Although some seemed to deliberately remain seated, CharisaÂ the Violin Diva brought nearlyÂ everyone to their feet during her powerful rendition of “Lift Every Voice and Sing.”

Moderator WNYC host Keli Goff kicked off the discussion by asking the audience which presidential candidate they planned to vote for in November. That’s when it became clearÂ that the crowd was dominated by Hillary Clinton supporters. A small group of attendees clapped when in support ofÂ Green Party candidate Dr. Jill Stein, while just a couple of brave souls admitted to backing DonaldÂ Trump. When Goff asked who was voting for Libertarian candidate Gary Johnson, the crowd became unusually quiet before someone finally shouted out, “Who?”

The crowd continued to chime in as the panelists spoke. When Goff asked the panelists if Clinton had done enough to convince black voters that she will prioritize police reform should she win the White House, a woman in the crowd interrupted by shouting, “Yeah, she said it!”

Goff asked McConnellÂ to explain Trump’sÂ offensive comments towardsÂ different groups of people, and specifically women. In response, heÂ defended the controversial business magnate, saying, “I think you all know that Donald Trump loves women,”which–by no surprise–incited jeersÂ from the crowd. McConnellÂ also causedÂ an upheaval when he claimedÂ that Trump doesn’t lie, “What heÂ does is exaggerate like all the time,” he said.

At another point during the panel, Dingle offered Trump advice on how to appeal to black voters. Rather than making grandiose promises and being condescending, “Talk about specifically what you can do to advance African Americans,” he said. “Put aside divisive language and talk about policies so that you can talk to everyone who is a part of the electorate,” he added.

According to Salgado, both candidates need to do more to attract Latinos. However, she criticized Trump for not putting out proposals on immigration and education that would move the country forward. Instead, “Donald Trump has ignored the Hispanics and insulted them,” she said.

Eventually, one restless audience member yelled to the panelists, “Why are we talking about Trump?”

The Apollo audience was just as boisterous during the live screening of the presidential debate. One woman repeatedly yelled, “You’re fired!” whenÂ Trump appeared on the screen. The crowd also booed when the Republican candidateÂ made a call for copsÂ to employ the controversial stop-and-frisk policing tactic, which was ruled as unconstitutional by a Manhattan judge due to its premise for racial profiling. Later on, the audience went wild after Clinton pressed her opponentÂ on why he has yet to release his tax returns.

However, Trump’s glaring disconnect with African Americans was felt most inside ofÂ the Apollo, when he talked about gun violence in black communities. “African Americans [and] Hispanics are living in hell because it’s so dangerous. You walk down the street, you get shot,” said the billionaire, which caused the crowd to erupt with snickers and laughter.

“Its [sic] amateur comedy night at the @ApolloTheater tonight as we listen to #Trump set on #race #POTUSdebate #ApolloUptownHall,” tweeted @GregoryMark72 from his seat.

“People in here screaming like they at a football fame,” tweeted @JordianRoss, along with the hashtag #ApolloUptownHall.

In contrast, the audience applauded when Clinton praised the “vibrancy of the black church” and black businesses.

After the debate, the panel was invited back on stage to share their post-debate analysis. However, hecklers managed on the second-floor balcony stole the spotlight, screaming, “Hillary Clinton is a war criminal!” and demanding a “revolution.”

Just another night at the Apollo.