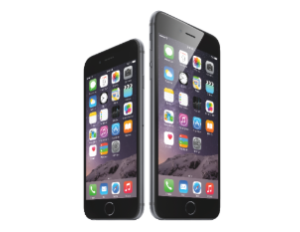 Apple has unveiled the iPhone 6 and iPhone 6 Plus, two different iterations of its line of smartphones.

Called (of course) the iPhone 6, Apple’s latest smartphone is larger, thinner, and, according to Apple, lasts longer than the previous iPhone 5s.

In addition to the iPhone 6 is the 6 Plus, Apple’s larger-screened smartphone, dwarfing some Android smartphones that were already gargantuan in anyone’s pockets.

Both phones will be available for pre-order starting September 12. Want one in the store? Be prepared to wait in line. Apple will have the phones in stores September 19.

The iPhone 6 and 6 Plus aren’t small devices. The screen size on the iPhone 6 is 4.7 inches, a bump up from the 4-inch iPhone 5 and 5s. The 6 Plus has a 5.5-inch screen, which is even larger than the popular Samsung Galaxy S5.

This is the second instance of Apple increasing its smartphones’ screen sizes. Originally, the iPhone had a 3.5-inch display, which became a 4-inch screen when the iPhone 5 was released.

The screen size increase is an interesting development, since Apple has been generally against changing display size and fragmenting its own market with differing screen sizes. With the debut of the iPhone 5, Apple even released a commercial explaining why the increase to 4 inches was “common sense.”

Both phones have also gone through substantial screen resolution increases. Both phones feature “ion-strengthened” glass, which sounds like an improvement over its previous glass, but doesn’t make it the rumored “sapphire” display that was passed around as fact.The iPhone 6 now has a 720p display, while the larger 6 Plus has a 1080p display, putting it in line with high-end Android smartphones.

The debate over smartphone resolution is a complicated one, which makes Apple’s decision to create a 720p smartphone an interesting one. Smaller smartphones than the iPhone 6 do have 1080p displays, but the human eye’s resolution often negates any additional benefits you get from the extra pixels on a smaller display.

Battery life has always been an issue with smartphones, but Apple’s steadily increased smartphone efficiency, and managed to squeeze even more juice out of even larger phones.

The 6 Plus and its larger frame holds a larger battery, giving it 80 hours of audio playback time and up to 14 hours of video playback. The iPhone 6 has a similarly impressive battery life, but hands-on tests will show whether the claims are true.

Both phones also have an updated motion processor. The new M8 processor can tell when you’re walking, running, or cycling, and can detect elevation levels to track how many flights of stairs you’ve climbed.

While the updated iPhones boast larger screens and faster processors, Apple’s secret weapon could be its brand new mobile payment system, Apple Pay. During the keynote, Tim Cook showed of a demonstration of an average purchase, complete with wallet-searching, card swiping, and a seemingly farcical approximation of paying with a credit card.

With Apple Pay, paying for products means tapping your new iPhone to a compatible checkout point-of-sale system (POS) and using the phone’s TouchID fingerprint scanner. It’s already in use at places like Walgreens, Subway, and Home Depot, and set to debut in other establishments like McDonald’s and Disney stores later on.

The technology isn’t new; Google Wallet led the charge a few years ago, but didn’t gather much steam. Apple’s cache could be the impetus that drives widespread adoption of smartphone mobile payments, and could make credit cards the new cash.

Near Field Communication (NFC) is also included in the new iPhones, but as of right now it seems like it will be used only for Apple Pay. NFC allows your smartphone to communicate with other NFC-enabled electronics by tapping your phone to them. Features like Apple Pay, which let you tap your smartphone to a POS and instantly pay without a credit card.