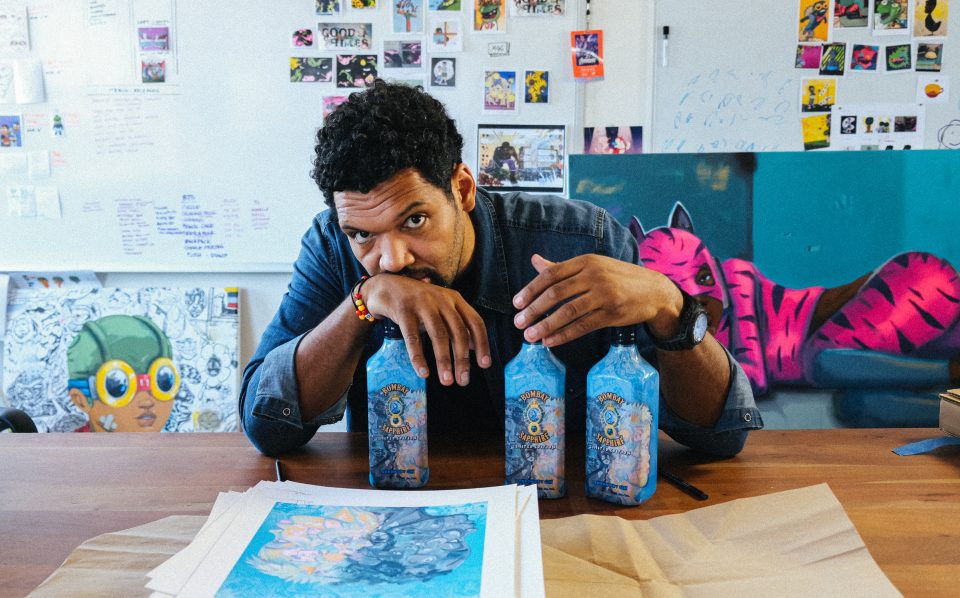 Image via Bombay Sapphire
Since the start of the protests sparked by the viral video of a police officer suffocating George Floyd, corporations and public figures have been more public with their support for the Black Lives Matter movement and have been pressured by consumers to work toward social change and combatting racial injustice. One visual artist decided to use his art to help the cause with a collaboration for a limited edition gin to support the Black Lives Matter movement.
Chicago artist Hebru Brantley has his Afro-futuristic designs displayed in galleries all around the world including Hong Kong, London, and Basel, Switzerland. His work has earned some celebrity collectors including Jay-Z, LeBron James, and Swizz Beatz. This week he unveiled a new collaboration with Bombay Sapphire for a limited-edition bottle to benefit the Chicago chapter of Black Lives Matter. The design would be the company’s first ever artist collaboration.
“[My partnership with Bombay] started [a couple] years back,” says Brantley in an interview with BLACK ENTERPRISE. “Folks [at Bombay] watched my growth as a visual artist [over] the years [and] they reached out to see if I was interested in participating in some of their [projects moving forward]. I had participated in their Young Artisan series [previously]…There was an idea that we could do some collaboration together and the bottle was [a part of that].
“The inspiration arrived from when I was a part of the Artisan series years ago,” explains Brantley. “The piece [that won] for Chicago was one of my profile heads with this loose abstraction surrounding it. For me, it was [a] full-circle moment [in] thinking about what I wanted for the design to be [about]. I thought it would be cool for me to go back to how it all started for me with Bombay. With this particular design, I appreciate it because it expresses for me a lot more than one single thought but multiple ideas and to encapsulate a few different feelings and emotions.”