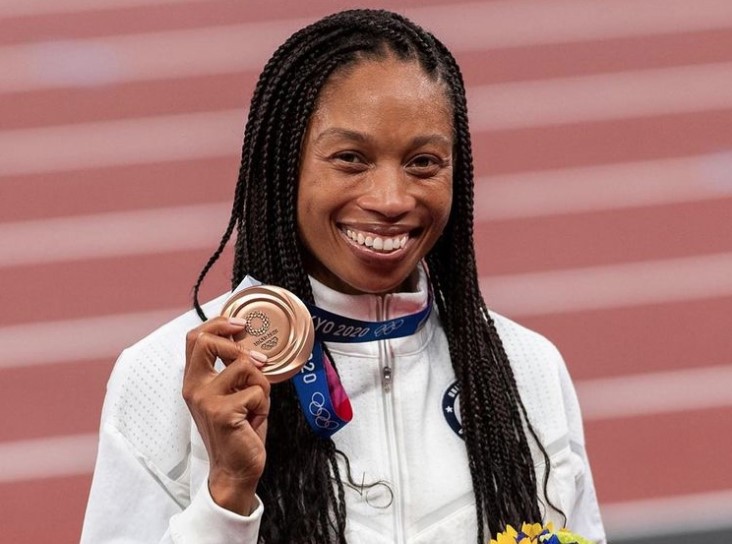 Track star Allyson Felix proves that it’s never too late to achieve your dreams. At 35-years-old, she is now the most decorated female athlete and mom in Olympic track and field history.

On Saturday, Felix captured her 11th career medal after US victory in the women’s 4×400 meter relay. Felix, along with her American teammates Dalilah Muhammad, Sydney McLaughlin, and Athing Mu, took home the gold medal with a time of 3:16.85. Poland finished second in 3:20.53. The Jamaican team won bronze in 3:21.24.

“Olympic Champions,” Felix wrote on Instagram. “This is a special group of women who will continue to shape the world around them. This moment. These women. It’s more than what I could have dreamt of!!!

Felix’s victory in her fifth Olympics was record-breaking. Her 11 Olympic medals allowed her to zoom past Carl Lewis’ previous record. Lewis, one of the greatest track and field athletes ever, earned nine Olympic gold medals and one Olympic silver medal.  Felix’s collection consists of seven gold, three silver, and one bronze.

On Friday, Carl Lewis shared a congratulatory message on Twitter.

“35 never looked so good. What an amazing career and inspiration. Now on to the relay.”

Congratulations @allysonfelix. 35 never looked so good. What an amazing career and inspiration. Now on to the relay.

There’s only one person in the Olympic record book who has more medals than Felix. That’s Paavo Nurmi of Finland. He holds the all-time mark with 12 medals from 1920-28, The Washington Post reported.

“I’m not afraid of losing,” Felix shared on Instagram before her final individual Olympic race on Friday. “I lose much more than I win. That’s life and I think that’s how it’s supposed to be. I’ve found that I learn more from my losses and that I have gained much more value in the journey toward a goal than achieving that goal. I’ll line up, I’ll give my best and I will either win or lose and that doesn’t scare me.”

The Journey to Olympic History

The years leading up to Felix’s history making victory haven’t been a crystal stare.

Allyson Felix is also a mom, and has had to deal with backlash from sponsors. In 2019, she spoke out against her treatment from her former sponsor, Nike. She revealed that Nike threatened to pay her 70% less than she earned before she became a mom. In response, Nike announced a maternal leave policy to protect pregnant athletes.

When Felix won her 10th medal this week, she expressed the power behind that moment.

“I think this one is my favorite medal because of the journey it represents,” Felix wrote on Instagram. “You all have been on this journey with me and you’ve seen some of the challenges. Sitting in the NICU listening to Cammy’s monitors beeping as she stopped breathing again and I thought we might lose our daughter again.”

She adds, “The days with no sponsor when there were so many voices of doubt telling me to just retire. There were days that I never thought I’d be able to get back into race shape ever again. These are some of my struggles, but I know you’ve been going through your own, but look at us still smiling!! Thank you for your support, I do this for you. Keep Going!!”