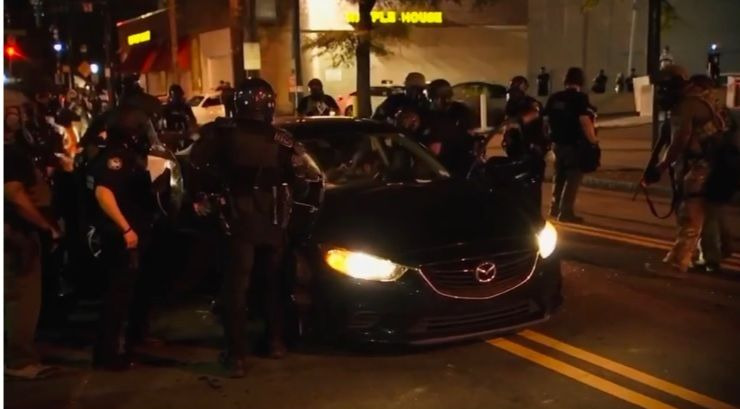 Two police officers from Atlanta have been terminated for using excessive force to detain two college students who were in their vehicle, according to CBS 46.

CBS 46 News, which was reporting live, captured the moments that Messiah Young, 22, and Taniyah Pilgrim, 20, were forcibly taken into custody after 9 p.m. Saturday night. Young is a student at Morehouse College, and Pilgrim attends Spelman College.

The couple was leaving the protest at Atlanta’s Centennial Olympic Park as the video shows police officers smashing the driver’s side window, forcibly opening the passenger side door, and using stun guns on the passengers before forcing them out of the vehicle.

Three other officers involved in the incident have been placed on desk duty pending further investigation. Mayor Keisha Lance Bottoms made the announcement during a press conference on Sunday.

“After review of that footage, Chief Shields and I have made the determination that two of the officers involved in the incident last night will be terminated immediately. The other three officers are, right now, on desk duty pending further determination of what, if any, appropriate disciplinary action should be taken against them,” the mayor said.

Atlanta Police Chief Erika Shields also made a statement at the press conference.

“We have been handed an enormous obstacle and have, by and large, done it as well as we could in the space that we’re being afforded,” Shields said. “It’s an unpleasant space to be in but that does not relieve us of our responsibilities. And we have a responsibility, when we handle any incident, to not escalate the incident and not cause further harm or injury.”

In a police report filed by Officer Gardner, he stated that officers were attempting to secure Young and Pilgrim. He said he approached the passenger side and gave verbal commands to Pilgrim to “show her hands and stop resisting.” Then, Gardner says he heard other officers shout “gun.” Gardner said he couldn’t see the hands of the passenger, so that’s when he tased her.

“I was not sure if she or the male driver was the one suspected of possessing the handgun. I served in a back up roll to officers that were making the arrest based on a traffic stop. My purpose for deploying my taser was to bring the female under control for which the officer I was assisting was making an arrest. I did not witness the initial traffic violation or crime under which she or her male companion were being investigated,” Gardner said in his report.