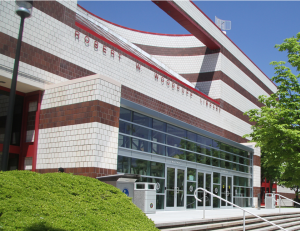 This is the first time a historically black college library has received this national honor. The AUC Woodruff Library competed with hundreds of national university libraries.

“This award is a stamp of recognition to the staff here, and the programs we offer our students,â€ says CEO and Library Director Loretta Parham. “This brings an immense endorsement to the level of education that is provided at the AUC. It proves that an HBCU can bring as much value and expertise as a library at a predominantly white institution, and we do it with much fewer resources.â€

The AUC Woodruff Library has holdings of more than 1.5 million items in all formats, and its Archives Research Center is a repository of African American history and culture, including not only the historic Morehouse College Martin Luther King Jr. Papers, and the Tupac Shakur Collection, but also the Voter Education Project Organizational Records, which Parham says “provides insight into barriers that restricted African American registration and strategies used to increase African American participation in voting.â€

“The library also works with faculty in voter education programs to inform students and the wider community about the U.S. democratic process,â€ Parham says.

Sit-In at the Library

Perhaps it’s fitting that a library so beloved by its students has received this recognition of its peers. A few years ago, students held a sit-in at the library, to protest its 2 a.m. closing time during exam weeks. The sit-in involved all four schools, and the protest leaders had informed the local news media, which broadcast the story.

“Having worked in public, school, and academic libraries for more than 30 years, I had never met any group that felt so strongly about staying in the library,â€ says Parham, who received a distinguished Alumni Award from her own alma mater this year. “We are now open 24 hours during exam weeks.â€

For more about the AUC Robert W. Woodruff Library, visit its website.