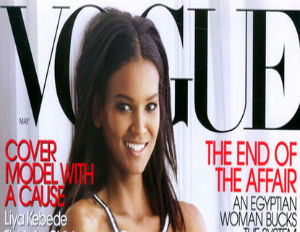 The life of a supermodel doesn’t have to be all about runways, magazine covers, and photo shoots. As the first black woman to be the face of EstÃ©e Lauder cosmetics, Ethiopian native Liya Kebede is an international beauty breaking barriers and seeking change. In 2005, the 29-year-old mother of two was appointed goodwill ambassador for Maternal, Newborn and Child Health for the World Health Organization, and she started a foundation to help support those initiatives of the WHO. Here Kebede talks about her mission to better the standards for pregnant women in Africa.

Describe the conditions in the poorer African countries for a woman during childbirth.
Every time I go there and I see it, it still shocks me how bad it is. It’s very difficult to imagine what its like, even though I’m from there. I believe about 70% or 80% don’t give birth in a hospital; they deliver at home. And when I say at home, they are in a place with no running water. The hygiene issue is just drastic. The woman could get an infection or have a hemorrhage and die from that. Or the baby’s too big, so she would be in labor for days until the baby eventually dies. They don’t have anyone there trained to help deliver the baby.

What about the medical care available after the birth?
Even once she has the baby, its survival rate is so small. The baby could die from malaria, diarrhea, or pneumonia. And it’s just so sad because all these things are completely preventable. It’s just that they’re not getting the money and they’re not getting the priority–that’s what the whole problem is.

Why not?
In Africa, unfortunately, there are so many crises. But women’s health is really important; it needs to be a priority. The woman is the core of the family, she really needs to be helped so she can take care of her family and we can have better generations and children who can take care of themselves, who are educated and healthy and can then take Africa forward.

You’ve successfully used your fame to boost your humanitarian efforts.
It’s very helpful. It brings the awareness to a much a wider audience worldwide. The thing with causes is that the problem is happening in a place that is so far away, so you never hear of it. You need somebody to bring it to the front and talk about it.

There’s been a lot of celebrity interest lately in Africa. Do you think it works?
All the help for Africa is just incredible. It’s changing people’s perceptions of the world and each person’s responsibility to the world, and it’s making even younger and younger people feel concerned more than ever.

With so many aid campaigns, why aren’t the resources getting into these places quicker?
These things take time. We’re talking about solving an incredible amount of problems. These are really difficult and very fundamental issues. And it’s very expensive. Just in Ethiopia alone, you have 75 million people. So it’s a very difficult job.

What’s your ultimate vision for assisting countries in Africa?
I really support the whole idea of aid in the business sense, like partnerships with companies. We have to create jobs and generate money. It’s that whole thing about teaching them how to fish instead of giving them fish. It’s a brilliant idea because you’re not just donating money, you’re giving them a business, a tool, a trade so they can support themselves, give a boost to the economy, and help Africa sustain itself.