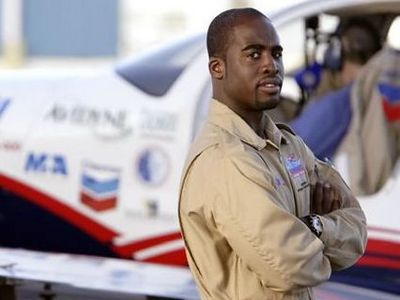 On June 27, two world records were set in the field of aviation: For the first time, an African American flew solo around the world, and the youngest person ever flew solo around the world. What’s more, these records are held by the same individual. The precocious pilot is Barrington Irving and, to date, the 23-year-old’s flight is one of only 255 that have successfully completed a round-the-world trip.

Irving founded Experience Aviation Inc. in 2005, a nonprofit focused on encouraging youth to pursue careers in aviation and aerospace. Born in Kingston, Jamaica, and raised in the inner city of Miami, he named his single-engine plane Inspiration to provide a beacon of hope for urban youth looking for meaning and direction. BLACK ENTERPRISE spoke with this Florida Memorial University senior to discuss his historic accomplishment, the absence of blacks in aviation, and the source of his inspiration.

What motivated you to fly around the world?I was introduced to aviation after a United Airlines captain, [Gary Robinson], took time out for me and introduced me to the field. After earning my first pilot’s license, I looked back at that and said, “What if I can do the same thing, but on a greater scale?” That’s when I came up with the idea for the flight around the world, to encourage other youth.

You didn’t have a plane, so you asked manufacturers to donate parts to you. How did you persuade Columbia Aircraft Manufacturing to assemble the plane?
When I approached [Columbia Aircraft Manufacturing], I said, “If I can get the parts donated, will you honor that and build a plane?” I wrote a proposal. I convinced their partners, who assembled different pieces of the aircraft. Once their partners got behind me, they had to show some type of support. I had to do the work and get the parts donated. That’s how I was able to piece the aircraft together, which dramatically cut the cost of the plane in half.

What is the source of your inspiration?
My faith in God, my parents, and my mentor. And just seeing how this project has come together from nothing. When I look back at where I started and where I am now, that’s an inspiration in itself. There are a lot of young people out there that are suffering. If you’re born poor, you’re most likely going to die that way in a lot of countries. At least here you have an opportunity to try. A lot of young people take that for granted.

You mentioned the hopelessness among the inner-city youth in your Miami neighborhood. Did you ever feel hopeless while you were growing up in that community?
yes. But what do you do? You go to high school. If you get a scholarship, you’re fortunate. But what comes next? You see others that graduate and then they’re just out on the street. I wanted to do something different. I saw what some of my friends went through, and I just wanted something different for myself.

Does it concern you