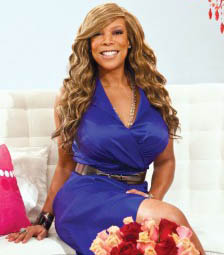 Unabashedly bold, radio personality Wendy Williams concocted an irresistibly alluring guilty pleasure for listeners who tuned in to her midday drive radio show, The Wendy Williams Experience, on WBLS FM in New York City. Two parts salaciousness, one part pop culture trivia, and a dash of sage advice sprinkled with spicy celebrity gossip, the show–hosted by the self-titled “queen of all mediaâ€–quickly shot to the top, rankingÂ  No. 1 in New York City in the 25—54 age group.

Perhaps marking the zenith of her career, Williams, a 23-year broadcast veteran, was inducted into the Radio Hall of Fame in August, on the heels of announcing her departure from radio in July. Also a best-selling author, Williams is parlaying her brand into daytime television with The Wendy Williams Show after a successful six-week trial run. But beneath her signature biting humor and brazen candor is a shrewd businesswoman and advocate. The 45-year-old New Jersey native talked to Black Enterprise about her passion to reduce youth violence and her mission to give back to teens in her hometown.