Wyclef Jean: Backtalk With The Musician 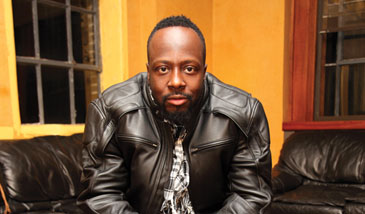 Growing up in Croix-de-Bouquets, Haiti, until the age of 9, Wyclef Jean’s music often sheds light on what it was like living on the poverty-stricken and war-torn island. Jean’s eclectic sound and pensive lyrics have helped raise awareness about the impoverished Caribbean nation, yet at the same time they’ve inspired hope for its youth.

The artist has reaped numerous top 10 albums and singles for both his collaborative and solo works while selling more than 50 million albums worldwide. His seventh solo album, Wyclef Jean, is set to be released in March. Black Enterprise recently caught up with the 37-year-old multiplatinum, Grammy Award-winning writer, producer, humanitarian, and goodwill ambassador to learn about his partnership with Timberland, how he turned his lyrics into action, and why he isn’t running for president of Haiti.

You’ve talked a lot on your albums about the oppression of Haiti. What inspired you to stop singing about it and do something?
I sat with Harry Belafonte, who is one of my mentors, and I told him that I wanted to do something for Haiti, but I didn’t know the best way to go about it. He said you can either sing about it or you can physically go back and make a difference. In 1994 I started the Wyclef Jean Foundation and Clef Kids. In 2005 I founded the YÃ©le Haiti Foundation. It’s an art school that will consist of a gymnasium, Internet cafÃ©, and student exchange program. When people are asking who is the next artist coming out, the next soccer player, or the next mathematician, I want them to be able to look at the YÃ©le Center.

Would you ever run for political office in Haiti?
I’m not saying that it can’t happen, but me taking a political position is not really going to help. In order to help Haiti I have to get wealthy. If I’m able to generate billions of dollars, I know that I’m going to put billions of dollars into the country. The country needs investments.

How does your partnership with Timberland benefit Haiti?
When you look at the Dominican Republic side of the island you see it all green, but when you look over on Haiti’s side you’re like, “Man, this place is dry. What happened?â€ This is the result of deforestation. So I teamed up with Timberland. For every boot we sell, $2 goes back to tree planting in Haiti. There’s also an art school in Jacmel, Haiti, making T-shirts that are sold in Timberland stores. For every shirt sold, $1 goes back to that art school.

What will it take to mend the years of poverty?
It starts with job creation. The international community can do a lot with a place like Port-au-Prince, the capital of Haiti, which has a population of 3 million people. We can come up with a better trade agreement and put some factories in Haiti–not some sweatshops either, but create a fair rate for workers. Haiti was one of the largest manufacturers of baseballs at one point. A lot of manufacturing is taking place in China, but with all respect to China, it’s far. You have a place that’s only three hours away and people who are willing to work.

This article originally appeared in the January 2010 issue of Black Enterprise magazine.