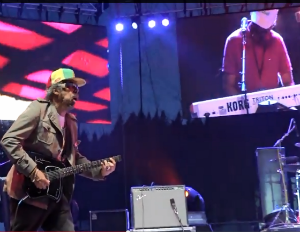 All eyes are on Jamaica as President Obama visits the island nation as he makes his way to the Summit of the Americas in Panama this weekend.

Emotions are running high for Jamaicans. Â President Obama’s visit marks the first official visit by a U.S. president in over 30 years.Â  The trip is of special significance to one of Jamaica’s “Reggae Ambassadors, Third World band founder Stephen “Catâ€ Coore.

In addition to being one of the most influential artists in the worlds of Reggae and R&B, and host to a radio show on Sirius Radio, Coore has unique cultural and political insights influenced by his father, David Coore, the former DeputyÂ  Prime MinisterÂ  of Jamaica and an author ofÂ  Jamaica’s Constitution in 1961. That was followed by a career as the Caribbean Representative of the Inter-American Development Bank in 1978.

Coore, also father of Steve Coore, guitarist of red-hot Reggae band Chronixx, and Shiah Coore, bassist for Damian Marley, chose to share his ideas on a musical stage rather than the political stage graced by his father.Â  The musician’s humanitarian efforts, however, have not gone unnoticed.Â  He and Third World were awarded the Medal of Peace from United Nations for contributions to African causes in 1986 and they were invited guests at a tribute to Nelson Mandela in Atlanta, Georgia in 1990.

Third World has been together for over 40 years, making them one of the longest standing bands currently recording and performing.

Third World is currently performing in West Africa in the Ivory Coast, as the country kicks off “Abi Reggae,â€ the first edition of its Reggae International Festival April 9 through 12 at the Culture Palace of Treichville in Abidjan.Â  Other performers include, Ky-Mani Marley, Mutabaruka, Alpha Blondy, and Kojo Antwi.

Coore took time out to talk to BE about what President Obama’s visit to Jamaica means to the Jamaican people, and the difficult socioeconomic challenges the country faces, all with “the audacity of hopeâ€ for the future of the people of the island nation.

BE:Â  What do you think your father would have thought of President Obama’s visit to Jamaica?

Coore:Â  As far as my Dad is concerned, I think he will be very proud to know that Jamaica is getting a visit from the first black president of the U.S.Â  Having served as minister of foreign affairs for quite some time, if it was 10 years ago, my Dad would be the one meeting him, so from thatÂ  point of view, Dad would have been absolutely thrilled to know that Obama is in Jamaica, and that he paid us a visit almostÂ  unannounced.

BE:Â  What does the U.S. President’s visit mean to the people of Jamaica?

It means a lot to Jamaica.Â  Jamaican people right now are under pressure because the IMF agreement with Jamaica has put a lot of economic stress on people.Â  Gas prices have not gone down, even though the gas prices of the world have gone down, we’re still struggling with that, and the price of food is very, very high under this agreement.Â  Wages are frozen for public service people, and there’s not much money to spend on hospitals, on roads and so on.Â  So, it’s a critical time for people, a time when people have to tighten their belts, but the future is good.Â  So far, we have done very well in honoring the IMF agreement and this is a proud moment for the Portia Simpson Miller government to know that they have been able to do that.

BE:Â  Do you think the President’s visit will bring attention to some of these issues?

There’s a long way to go in terms of how the people are going to benefit in the long run from all of this.Â  So Obama’s visit will help us feel good about our relationship with America and will help us to keep our heads focused on the future and getting things right.

BE:Â  The Jamaican people seem to have a special affinity for President Obama?

There’s a lot of sympathy in Jamaica for Obama because Jamaicans believe that he has been given a very rough time by the Republicans particularly, and that a lot of things he has wanted to do, he has had real trouble doing them even though essentially they are right, they are good things to do.Â Â  So it’s a very, very special visit.Â  It’s complete mayhem down there.Â  People are just going crazy, and it’s wonderful that he went to the Bob Marley museum.Â Â  I think that was unexpected and it’s very special and it’s endeared him into the hearts of all Jamaicans.Â  So, as far as the visit is concerned, there is absolutely nothing I can say more, except I’m sorry I’m not there to personally see what’s going on?

BE:Â  How are you and Third World enjoying the Ivory Coast?

Coore:Â  It’s great to be here in Africa.Â  The festival is to showcase Africa’s reggae with Jamaica’s premier stuff.Â  Very cool.

BE:Â  When can we see Third World again in the United States?

After our return from the Ivory Coast April tour dates, Third World will be at the JAGA Festival in Galveston Island, Texas and then in the Â ‘Big Easyâ€ at the New Orleans Heritage Jazz Festival.