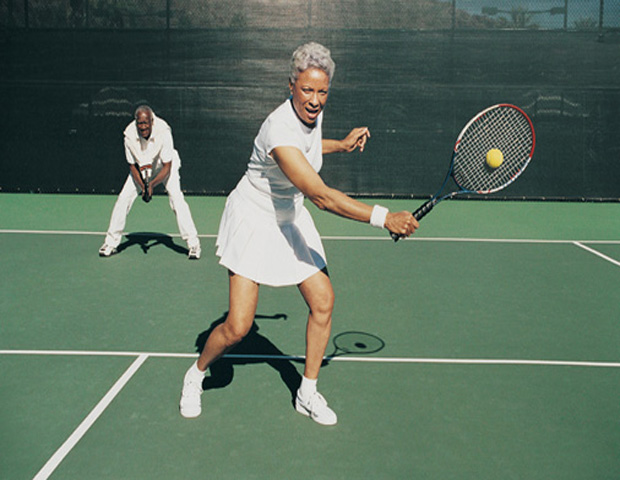 With recent heavy interest in the world of tennis it is no wonder that many people are flocking to the courts to take their swing at things. With no specify start age, the young and old are stepping out for the first time to learn the game of tennis as a way to establish coordination, gain exercise and expertise, to network, or to simply have fun. BlackEnterprise.com champions the tennis wave and would like to offer you, the new player, a little tennis lingo to get you started off right.

Learn these terms so that you may be in the loop at the 2015 Black Enterprise Golf & Tennis Challenge this Labor Day Weekend, September 3rd-6th, at the PGA National Resort & Spa in Palm Beach Gardens, Florida.

Ace: A serve that the returner (opponent) doesn’t even touch with his/her racquet. An ace wins the point immediately for the server.

Baseline: The line, parallel to the net, which defines the outer-most edge of the court.

Drop shot: A soft shot hit just barely over the net. You hit drop shots to get your opponent close up to the net.

Foot fault: You commit a foot fault when your foot (or any other part of your body, for that matter) touches the baseline or center line during your serve. You automatically lose the service attempt when you foot fault.

Grand Slam: Winning the U.S. Open, Wimbledon, Australian Open, and French Open, all in one year.

Grip: The way you hold your racquet. You can choose from three standard grips in tennis: the eastern, continental, and western grips.

Lob: A shot that you hit high and deep into your opponent’s court. You typically use a lob to get the ball past an opponent when he/she is standing at/near the net.

Netpost: The two hard metal posts that hold up the net. If your shot hits one of the netposts during play and bounces in your opponent’s court, the shot is good.

Overhead: Also known as aÂ smash, the overhead is a shot you hit over your head during play, either on the fly or after the ball bounces.

Passing shot: A forehand or backhand you hit past an opponent when he/she stands at the net.

Seed: A player’s rank in a tournament.

Serve: A stroke, made from over your head, which you use to start each point.

Sideline: The lines on the court, perpendicular to the net, which define the widest margins of the court.

Spin: Hitting the ball in such a way that when it bounces, it does things that your opponent doesn’t expect.

Volley: A shot that you hit before the ball bounces, usually at the net.