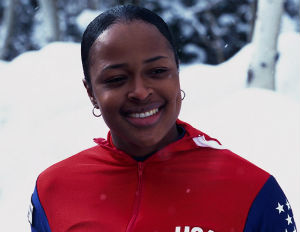 On Feb. 19, 2002, Vonetta Flowers made history by becoming the first person of African descent to win a gold medal in the Winter Olympics. Flowers was born Oct. 29, 1973, in Birmingham, Alabama. She attended the University of Alabama at Birmingham, where she stunned the public with her gifted sprinting and long jumping. After trying, on several different occasions, to qualify for the U.S. Olympic team, Flowers reluctantly decided to try bobsledding, which led to her success and paved the way to fame.

[Related: #BE28andGreat: This Day In History – Rosa Parks Is Born]

On that iconic summer day in 1982, Coach DeWitt Thomas arrived at Jonesboro Elementary school to recruit the quickest young boys and girls for the Marvel City Striders. To help speed up the process, Thomas only recorded the first initial and last name on the time sheet, and at the end V. Jeffrey was listed under the fastest time. Upon realizing that V. Jeffrey was a girl, Thomas became inspired to help young Vonetta compete in the Olympics one day. He later described her as “one in a million.â€

Throughout the next 10 years, Flowers remained positive, focused, and determined, graduating from P.D. Jackson Olin High School in 1992. In addition, she became the first in her family to attend college, accepting a track and field scholarship from the university. With more than 35 conference titles and wins, Flowers qualified for the Olympic trials in 1996 and 2000. During the 1996 trials, she was unsuccessful in earning a spot, but with persistence and strength under her belt, she found herself once again competing at the 2000 Olympic trials. Because of injuries and a disappointing performance, Flowers decided to retire from track and field and start a family with her husband, Johnny.

Two days after her failed 2000 Olympic trials, Johnny spotted a flier for track and field athletes to try out for the U.S. bobsled team, but Flowers wasn’t initially interested,Â  believing that her lifelong dream of performing in the Olympics wasn’t attainable. She agreed to escort him, but Johnny pulled his hamstring shortly after starting the competition, so Flowers decided to fill in for him. Almost immediately she became the No. 1 brakewoman in the U.S.

One year later, at the 2002 Winter Olympics, along with a new partner, Jill Bakken, Flowers was awarded a gold medal at the inaugural women’s Olympic bobsled event–the first medal for a U.S. bobsled team in more than 45 years. After the competition, she gave birth to twins, and returned to bobsledding in 2003. She and her partner, Prahm, finished sixth during the 2006 Winter Olympics in Turin. After she retired, Flowers was elected to the Alabama Sports Hall of Fame in December 2010. She has credited her steadiness, determination, and faith in God to help her realize her Olympic dreams.