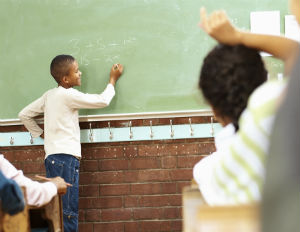 I first heard about elite math competitions when I was homeschooling my kids (yes, I homeschooled my children for eight years).

I read about the International Math Olympiad and MathCounts, and heard from homeschooling friends about summer math programs.

There is a whole world of math competition, fun, and beauty that many affluent families plug into. This is not the math that’s taught in school.

But, it’s this kind of math immersion that sets kids apart to later succeed in demanding college majors like engineering, which many students drop out of.

Now low-income students may have a chance to get in on the math action. BEAM, or Bridge to Enter Advanced Mathematics, is a New York-based nonprofit opening the door to the world of advanced math.

To apply, students must attend schools where 75% of students qualify for free or reduced-price lunch, and they must be in sixth or seventh grade.

This year BEAM, which started in 2011, is offering a day program for sixth graders in New York City.

Why did you start BEAM?

Zaharopol: I grew up a math kid. I went to summer math programs and math contests, and they really changed my life. I wanted to do something that would expand access to the kind of education that prepares people to be successful in STEM fields.

How did you know that certain people didn’t have access?

At the programs I went to there were few people of color. Most people came from affluent backgrounds or very well-educated families. It was clear that there was a disparity of access.

It’s interesting that you didn’t assume people of color weren’t interested or just didn’t have the math skill to participate.

I never thought that there was a lack of talent. What we’ve seen is that as access expands, more people become successful.

How has BEAM changed over the six years?

We now work with families year-round. New York City has an elaborate high school selection process, so we’ve become expert at it and use that expertise to help our students. We also help them apply to summer programs and organize events during the year.

Do the kids enjoy it?

They don’t want it to end–which is part of what we want to do. We want to show them that math is an amazing thing to do, and creating that community is part of that.