'Beautification' Isn't the Best Name for This Selfie Setting 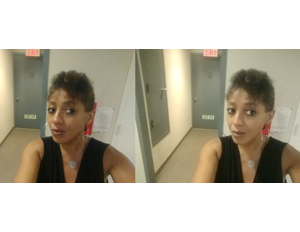 Part of my job as a tech journalist is reviewing the newest technology to hit the market. I just wrapped up a review of Motorola’s latest high-end Android phone, the Motorola Moto Z Force Droid.

It’s a hell of a phone. It’s large, yet lightweight, with powerful rear and front cameras. It also has turbo charging–the device charges to almost 50% full in less than 20 minutes.

There is much to like about this phone (you can read my review here.) However, one particular feature caught my attention. It’s not that the feature doesn’t work, it does. But it is something that spotlights once again, how tone deaf the tech industry is in its white, male dominance.

The feature is called “Beautification.” It’s a selfie filter. One described by Motorola in their Reviewers’ Guide as, “a new Moto feature that allows you to enhance your selfies by smoothing the skin to reduce blemishes or wrinkles. You can set this to manual or auto so your selfies will always look their best.”

When I tested it, I didn’t notice so much smoothing out of my smile lines or other wrinkles. I did notice that it made my brown skin tone about a full shade lighter.

I tested the feature on some other African Americans in our office. Sure enough, no matter the shade of our skin tone, Beautification lightened us up.

When we tested with a white colleague, her complexion was lightened as well. However, not as marked a difference from the original as was the case with African American skin.

Now, I know that a lot of selfie filters will lighten an image and attempt to smooth wrinkles to make for more of a “touched upâ€ subject.

My issue is with the name. Why is “beautification” being associated with a lighter complexion and smoothing of wrinkles?

By the way, I did reach out to Motorola to ask them about the feature. Here is their response:

“We’ve adopted a common feature in smartphone camera software that is generally referred to as ‘beautification’ within the industry. One aspect of the software feature balances imperfect lighting in order to minimize blemishes. It is a simplified version of what a professional photographer might do to retouch photos by adjusting the brightness. The manual mode provides full control of the feature so the user can determine the setting that shows them in the best light.”

Do I think Motorola is being deliberately sexist, racist, or ageist in naming this feature as such? Of course not.

Yet, it’s another forehead-smacking “Duh!” moment when it comes to Silicon Valley’s missteps on matters pertaining to diversity and tech products moving from quality assurance to final market items.

Just recently, someone at Snapchat thought it would be a good idea to release a racially insensitive filter that applies exaggerated, stereotypical Asian features to users’ facial photos.

Then there was the time HP made facial recognition cameras that would not recognize darker skin tones.

Then there was the outcry when Google Photos labeled black people as gorillas.

Or, remember when Dell came up with the horrific marketing idea “Della” to target its line of Inspiron Mini 10 netbooks to women? Instead of telling us about the netbooks’ specs, women were told we could use them to “Track your exercise and food intake” or to “find recipes online.”

Technology is not racist or sexist or ageist. A computer system does exactly what it is instructed to do. And let’s be clear, no one is suggesting anything nefarious about any of these technology misfires.

But it drives home the point: Diverse eyes looking at a tech product from concept to finish makes for a better product and certainly one less likely to offend.