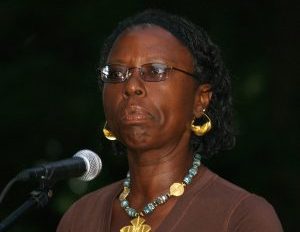 Leaving behind a body of literary gold, it has been confirmed that award-winning author Gloria Naylor died from heart failure last Wednesday at the age of 66.

Naylor was best known for her highly acclaimed debut novel, The Women of Brewster Place, which was praised for depicting the strength, unity, and relationships of black women living in a housing project. The 1982 novel became a best-seller and earned Naylor a National Book Award in 1983, the same year that she obtained a master’s degree from Yale University.

During her acceptance speech, the New York native said that she wrote the novel as aÂ tribute to her mother and other black women who, “in spite of the very limited personal circumstances, somehow manage to hold a fierce belief in the limitless possibilities of the human spirit,â€ reports The Huffington Post.

In 1989, the book was adapted into a mini-series through Harpo Productions, starringÂ Oprah Winfrey, Cicely Tyson, and Robin Givens. Following The Women of Brewster Place, the writerÂ published other literary treasures including Linden Hills, Mama Day, and Bailey’s CafÃ©.

In wake of the news of her death near her home in the Virgin Islands, a number of writers voiced their admiration for Naylor. On Twitter, Terry McMillan encouraged everyoneÂ to “read everything Gloria Naylor has ever written,” while Tayari Jones tweeted that Naylor helped launch her career.

Black Enterprise’s very own Tech Editor, Samara Lynn, also credits Naylor’s Mama DayÂ for being a personal inspiration and influencing her to become a writer.

“The travails of everyday life against the backdrop of mysticism fascinated me,â€ says Lynn. “That book made me want to go to Brooklyn College, Naylor’s alma mater.â€