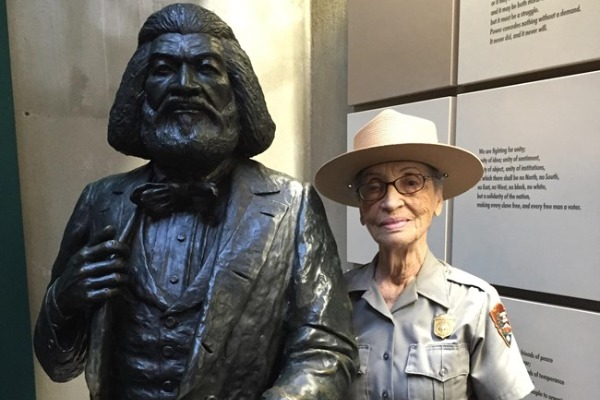 Born in Detroit, Michigan on September 22, 1921, Soskin works at the Rosie the Riveter/WWII Home Front National Historical Park in Richmond, California. She became a park ranger in 2004 after attending a presentation in 2000 to officially develop the national park, ABC 10 reports.

Soskin has admitted to having a “love, hate relationship” with Rosie the Riveter because she feels the cultural figure only tells a white woman’s story. Prior to becoming a National Park ranger, Soskin served as a civil rights activist, musician, and pioneering businesswoman.

Making it over 100 years in America as a Black woman, Soskin comes with a wealth of knowledge and an astounding resume. Her past work includes opening one of the first Black-owned record stores in California’s Bay Area, penning the song “Your Hand In Mine” about civil rights activist Fannie Lou Hamer, and serving in the United States Air Force in 1942, as noted by her NPS profile.

Soskin says she left the military after she learned that she was only hired because “her superiors believed she was white.”

After being born and briefly raised in Detroit, Soskin’s earliest childhood memories are with her Creole family in New Orleans. Her family was one of many Black families who migrated West after the Great Flood of 1927. Soskin has been in San Francisco ever since.

In celebration of Soskin’s 100 birthday, The National Park honored her with a special virtual and limited edition ink stamps.

A post shared by Rosie the Riveter NPS (@rosietheriveternps)

“Without Betty’s influence, we probably would not have told various previously marginalized stories in as much depth,” Park Superintendent Tom Leatherman told the NY Times. “Betty has an amazing ability to share her own story in a really personal and vulnerable way — not so people know more about her, but so they understand that they too have a story.”