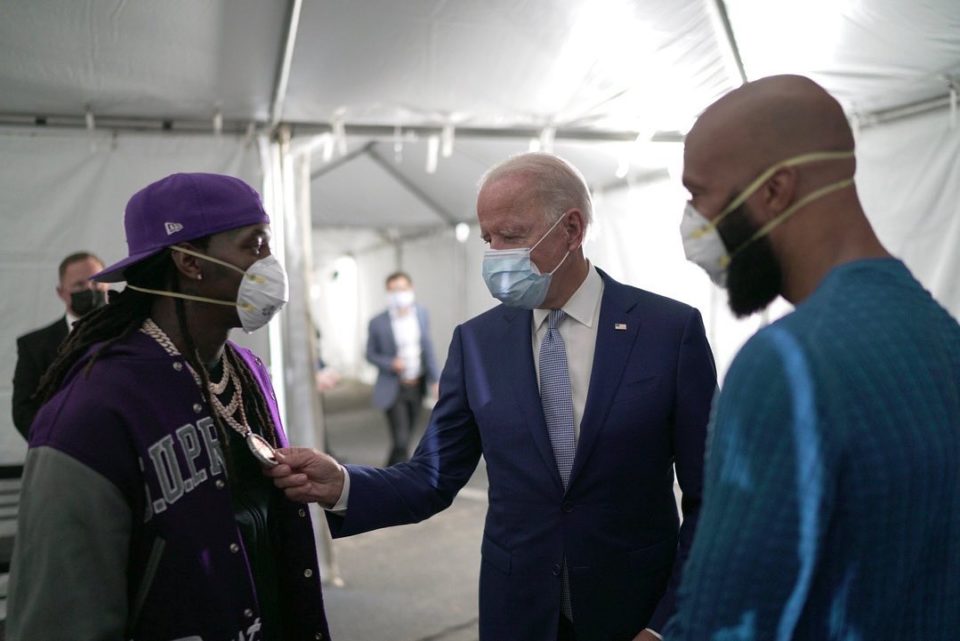 Despite recent news of Lil Wayne’s support of President Donald Trump, not all Black rappers are supporting the current resident of the White House.

At a political rally for former Vice President Joe Biden, two popular rappers not only came out to support and endorse Biden, they also performed. Rappers Lonnie Rashid Lynn, also known as Common, and Kiari Kendrell Cephus, also known as Offset, from the hip-hop group The Migos, took to the stage in Atlanta earlier this week in support of the Democratic presidential candidate, according to BET.

During a photo opportunity, the former vice president is seen admiring the “bling” of Offset, seemingly impressed by what he sees as he touches the rapper’s expensive chain.

The event, which took place in the Peach State on Tuesday, was a drive-in rally that took place exactly a week before the Nov. 3 presidential election. Popular and prolific rapper Common opened the performance by performing several freestyles before he introduced Georgia’s own Offset.

“We got Offset here,” Common told the exuberant crowd. “He’s been speaking up about voting for as long as I’ve known the man. I’ve got to say, it’s just been touching my heart to hear his story, and hear what he’s done.”

Both rappers later took to social media to continue to show their support for the Democratic presidential ticket of Biden and Sen. Kamala Harris and to encourage their fans and followers to go out and vote.

Go vote @joebiden ….. @common & I performed his rally in Atlanta

We’re in #Atlanta today on our GOTV Tour encouraging folks to vote and spreading a message of love, hope and joy. 📸 by @EverydayLaVan. #Vote