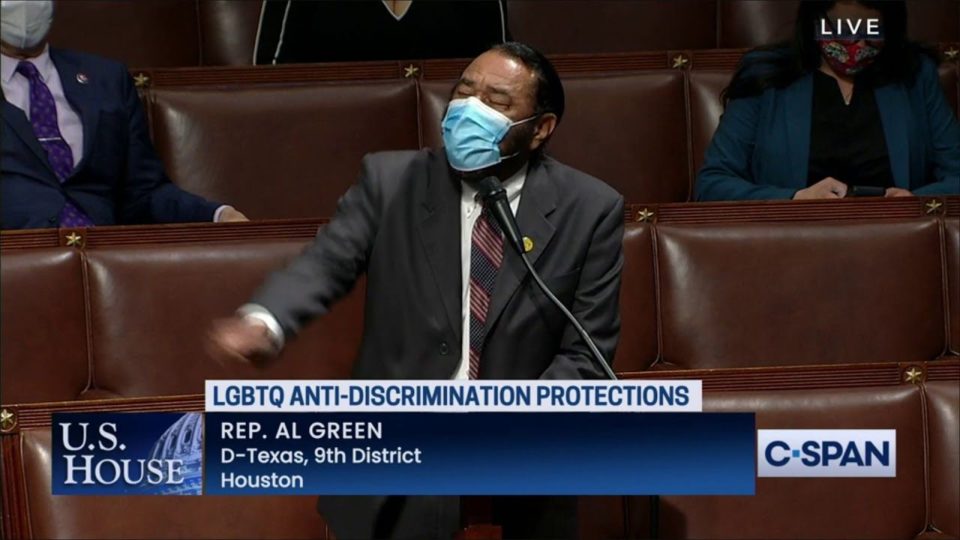 The Texas Democrat scorched Republican lawmakers on the floor of the House of Representatives Thursday, where he spoke out in support of the Equality Act. Green pushed back on arguments by the GOP that invoked God and religion to kill the bill.

WOW: Rep. Al Green (D-TX)amazing response to GOP Rep Greg Steube who said God opposes transgender rights: "You used God to enslave my foreparents. You used God to segregate me in schools. You used God to put me in the back of he bus. Have you no shame?" pic.twitter.com/nrjVAgg6t3

“You used God to enslave my foreparents. You used God to segregate me in schools,” Green said. “You used God to put me in the back of the bus. Have you no shame? God created every person in this room. Are you saying that God made a mistake?”

Green’s comments were a response to Rep. Greg Steube (R-FL), who said transgendered people are an offense to God.

“A woman must not wear men’s clothing nor a man wear women’s clothing, for the Lord your God detests anyone who does this,” Steube read from Deuteronomy 22:5 in the Bible. “When men or women claim to be able to choose their own sexual identity, they’re making a statement that God did not know what he was doing when he created them.”

Green received applause from other Democrats for his words and New York Rep. Jerry Nadler (D) added “what any religious tradition describes as God’s will is no concern of this Congress.”

The Equality Act would amend the Civil Rights Act of 1964 to provide the same protections for LGBTQ Americans. The bill passed the House Thursday with full support from House Democrats.

Rep. David Cicilline (D-RI) who helped introduce the bill last week and is also gay, said Thursday this is not about God, but about human rights, which all Americans deserve.

“Every American deserves to be treated with respect and dignity. With today’s vote, the House has again affirmed that LGBTQ people should enjoy the same rights and responsibilities as all other Americans,” Cicilline said. “I look forward to seeing President Biden sign the Equality Act into law.”