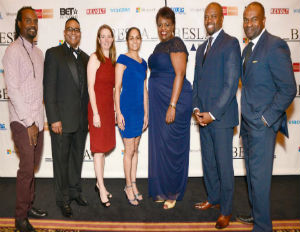 On Oct. 22, the Black Entertainment and Sports Lawyers Association (BESLA) kicked off their 34th Annual Conference in Mexico, with hundreds of influencers in entertainment and sports coming together for four days of networking and fellowship.

The evening began with a welcome reception hosted by Wells Fargo Advisors, and the conference opened up with remarks by Elke Suber of Microsoft, Bernie Lawrence Watkins of B. Lawrence-Watkins and Associates, and BESLA Chairman Matt Middleton. The week continued with intense panel discussions and sessions that covered topics such as “Minorities and Sports Franchises,” “The Future of TV and Film,” “Follow the Money,” and “Marketing, Branding and Social Media: Recent Trends in Sports Marketing.”

Hosting a gala Friday night, the conference honored industry power players like DeMaurice Smith who is the executive director of the National Football League, Joseph K. West who is the president and CEO of the Minority Corporate Counsel Association, Herby ‘Luv Bug’ Azor who is a music producer and founder of TRiPP TV, and many more.

In addition to recognizing individuals who’ve had a major impact on the industry, BESLA also invited law students from Howard University, John Marshall School of Law, Florida State University, University of Miami, University of Richmond, North Carolina Central University, and Charlotte School of Law to serve as conference ambassadors at the event. Understanding the importance of supporting the dreams of future lawyers, BESLA also awarded select law school students with scholarships to help them achieve their educational goals.