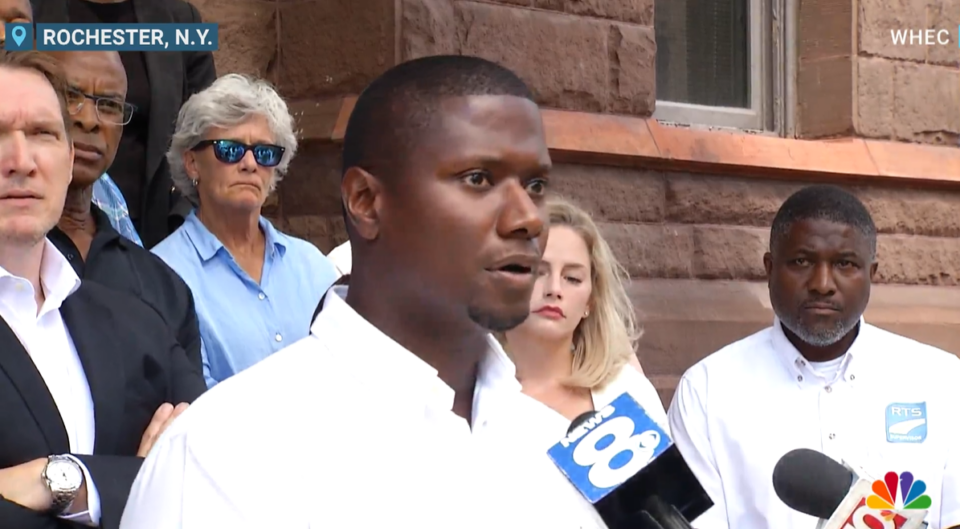 According to Huffington Post, a Rochester, New York, Black firefighter intends to sue the Fire Department and the city for $4 million after being forced to attend a racist party in July.

Jerrod Jones, a 14-year veteran of the Rochester Fire Department, alleges that Captain Jeffrey Krywy took him and three other firefighters to a party at a mansion in an affluent Rochester neighborhood that ridiculed Juneteenth, displayed fried chicken buckets, and other racist imagery; the Democrat & Chronicle reported.

Rochester firefighter Jerrod Jones explains why he is suing the city and RFD after he was ordered to an allegedly racist and politically charged party while on duty. @rgorbman @WXXINews @roccitynews pic.twitter.com/eLu8xsR9yg

“It means a lot to me when I put that uniform on, and I’ve always wanted to represent my city in a correct manner, in a decent manner, in an honorable manner, and what I had to experience a month ago, it cut me very deeply,” Jones said, speaking outside the Rochester City Hall at a press conference, according to WRGB.

Jones felt uncomfortable when he entered the mansion and saw a cardboard cutout figure of former president Donald Trump because firefighters are not permitted to attend partisan political events while on duty, CBS News reported.

In a notice of claim, Jones said the fire crew wore their uniforms when they arrived at a large home for the soiree, according to Huffington Post.

NEW: Rochester firefighter Jerrod Jones says his captain took him to attend a Juneteenth spoof party while on duty. Jones’ attorney has filed a notice of claim against the City of Rochester and RFD. @news10nbc pic.twitter.com/XGsimkGvxF

Jones also saw two large Juneteenth flags, KFC buckets of chicken, and a woman impersonating Democratic county legislator Rachel Barnhart in a “mocking but sexual” manner, according to the claim.

He also noticed photos of local Democratic politicians “on stakes” on the property. One of his colleagues said, “we shouldn’t be here; this is bullsh*t.”

Jones complained to an acting battalion chief the day after the party, but he was assigned to work with Krywy for four days, as documented by his report. Jones took a leave of absence and feared retaliation, and he currently suffers from emotional distress.

“It cut me very deeply; I’m sorry I even have to be here today,” Jones said. “But as terribly as I’m feeling, I’m glad it happened to me and not someone who could be easily intimidated.”

Rochester Fire Chief Felipe Hernandez said Jones’ claims were “unacceptable and an affront to everyone who works with the [Rochester Fire Department] and in City Hall.”

He explained an internal investigation had “finished,” and Krywy was suspended. Jones wants the situation investigated independently.