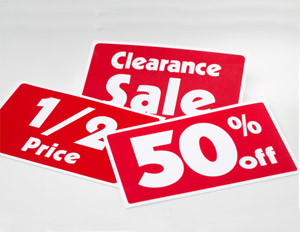 WHERE THE DEALS ARE

Now let’s talk about which retailers are offering big “door busterâ€ sales and other in-store promotions on Black Friday. If you’ve got kids, Toys “Râ€ Us is probably high on the list of places to hit. And this year, for the first time ever, Toys “Râ€ Us will open its doors at 9pm on Thanksgiving night.

Meanwhile, a slew of other stores, including Best Buy,Â Gap, Kohl’s,Â Macy’s and Target will all be open for business at midnight.

In fact, all this week, each of these retailers is currently offering pre-Thanksgiving specials with discounts averaging 20-40% off regular prices. It’s the latest in the trend toward earlier and earlier Black Friday deals. So much for waiting until the traditional 5am rush at WalMart, which will also have its own bargains on display early, and is opening at 10pm on Thanksgiving.

Most retailers don’t officially release their Black Friday deals until the day before Thanksgiving. But if past trends hold true, deals of 50-70% off will be common.

THE FREEBIES AND DEALS WAITING IN YOUR WALLET

No matter which stores you hit, there may be another way to purchase holiday gifts without actually dipping into your savings account or using your credit cards. It’s by cashing in rewards points that you may have racked up based on your past spending.

According to a survey called the Capital One Rewards Barometer, 75% of consumers are unaware that some credit card rewards issuers offer special deals during the Black Friday shopping frenzy. And since only 16% of those polled plan to redeem rewards for holiday gifts this season, this suggests that many Americans on a budget may be underutilizing this rewards points-for-gifts option.

Now that you know how and where to nab those rock-bottom deals, be sure that you don’t blow it financially by getting sucked into two Black Friday “dealsâ€ that are best avoided.

The first so-called deal to avoid is the extended warranty or insurance plan that retailers will be offering left and right. If you buy any electronics, household appliances or gadgets, you will definitely be pitched relatively expensive insurance (10% of more of the purchase price) to “protectâ€ the product. Such coverage is generally a bad deal, so you should just say “noâ€ to it and not waste your money.

Besides, your credit card may offer you some extended protection. Also, if the merchandise you buy does have problems down the road, chances are the insurance you’re being encouraged to buy won’t replace the item with a brand new product, but only with something of lesser value or a refurbished model.

The other financial trap you need to be aware of on Black Friday is the proliferation of retail store credit cards you’ll be offered. Invariably, some nice lady or cashier ringing up your purchases will ask: “Would you like to save 10% off your purchase today?â€ Again, your answer should be “no.â€

Store credit cards carry higher interest rates than do national brand cards, such as a Visa or MasterCard. Additionally, every time you apply for a new department store card, that triggers a “hard inquiryâ€ on your credit report, which lowers your credit score.

So, do yourself a favor and follow these tips for enjoying Black Friday shopping that doesn’t bust your budget–and doesn’t hurt your credit rating either.

Preview Our World: Back on Track With Marion Jones

FacebookTwitterYoutube
← 6 Speech Habits to Avoid During Job Interview ← Preview Our World: Back on Track With Marion Jones
×