Black homeowners in Washington state brought attention to the outdated covenant clauses that bar Black people from certain communities unless they are servants.

Black homeowners in several Thurston County communities were aware of racist language in their covenants that excluded residents who aren’t White, King 5 reported.

The illegal and unenforceable practice was deemed unconstitutional decades ago. But somehow was erased from homeowner paperwork in the Washington county.

Michelle Fearing, a homeowner in Thurston County, was completely appalled after she realized what her clause was actually saying. “It was shocking,” Fearing said. “I’m reading it going, ‘Whoa. Wow. That’s crazy.’” Fearing has a Beachcrest community covenant that was written in 1948.

It reads that, “No other than the white race shall be allowed to occupy any residence in this subdivision except servants.”

Fearing is now among 30 Thurston County homeowners who had the racist language omitted from the clauses ahead of the next time a property is sold.

“It’s the right thing to do,” Fearing said.

Thurston County has been busy sending out letters to community members about the clauses drafted in the early 1950s. Auditor Mary Hall instructed her staff to inform the public about the wording and how to have it removed.

“When I got to Washington state I was shocked how white it was. And now I understand why,” Hall said.

In the Stratford Park neighborhood, the clause shares the same racist language.

“No race or nationality other than the Caucasian race shall use or occupy any building on any lot,” the clause reads. The covenant did allow for “domestic servants, of a different race.”

Washington state recently passed House Bill 1335 where students at the University of Washington and Eastern Washington University will review existing deeds and covenants for discriminatory restrictions. In March, Thurston County declared racism as a crisis, The Olympian reported. What’s going on in Thurston County is expected in other counties within the state. 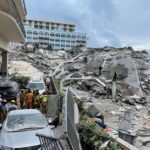