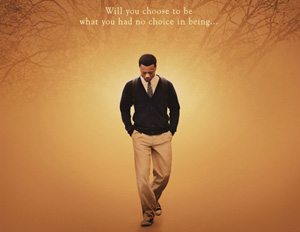 Patrik Ian-Polk has been using filmmaking to fill a void in Hollywood, giving voice to stories that aren’t often told or embraced but are important in the narrative of black American culture. The industry vet has more than a decade of experience as a filmmaker, known for sultry “dramadies” centering on the lives of black gay men. A native of Hattiesburg, Mississipppi, Ian-Polk has brought depictions of love and pain via hits like Noah’s Arc and Punks, both expanding into TV programming, and his works were landmark at the time of their releases in that they showcased the friendships, affairs, and careers of African American gay men in a way that hadn’t been done before.

BlackEnterprise.com caught up with him recently during a screening of his latest work, Blackbird, a coming-of-age film starring Oscar-winning actress Mo’Nique, Isaiah Washington, and newcomer Julian Walker. The plot centers around a closeted black gay teen named Randy Rousseau, raised by his religious mother in Mississippi (shot in his hometown.)

Check out Ian-Polk’s insights on how Blackbird began, his passion for providing a venue for the diverse stories that reflect what it means to be black, male, and gay in America, and his advice for filmmakers who seek mainstream exposure–and profits.

On his inspiration for making the film:

[Reading Blackbird] was the first time I’d read or consumed any work of art that was told from a black, gay perspective. … It changed my life. I was on the road to becoming a filmmaker–my goal from a young age–and I knew one day I would make that film.

I wrote the first draft of the script and I asked [British playwright and actor] Rikki Beadle-Blair to look at the script and maybe update it or add something, and it just kept going.

On working with Isaiah Washington and Oscar-winning actress Mo’Nique:

When I started casting, I didn’t really know where to begin, so I called up my friend [filmmaker] Ava Duvernay, and I said, ‘I’m doing this movie and could you give me some ideas as to the lead actor,’ and she said, ‘Well, who do you want? Who’s your dream?’ Isaiah Washington was my choice for the father, and she got me in touch with him. He read the script and said, ‘Hey, I’m down.’ Then he asked, ‘Who do you have in mind for Claire [the mother character]?’

We’d sent the script to Janet Jackson, and were waiting for that response. Isaiah asked, ‘Well what do you think about Mo’nique?’ and I said, ‘She’s great, but she’s never going to do this film.’ Â … This was early 2013.

While waiting, he just sent the script to Mo’nique … She said, when she read Precious she knew by page 10 she had to do that movie, and when she got to page two of [Blackbird’s script,] she said, ‘This is the one.’

I remember asking her, ‘How do you like to rehearse …’ and she said, ‘I just assume it’s … where you come to set ready to go,’ and she did.

They both are just incredible.

On reflecting his personal story to empower other black gay men:

Early in my career, someone told me, ‘What you should do is write stuff that really means something–that’s closest to you.’ As a young, gay, black man, I had nothing to look at that told me anything about being black and gay. Our families don’t talk to us about it. … You don’t have that social structure that straight kids get with the proms, dating, and all of that stuff. Our parents aren’t talking to us about what it is to be gay, in fact,Â  when I was a teen, I knew enough to know that I had to hide this and not talk about it. … I have guys that come to me and say, ‘Oh my God, when I was 15, I was confused and questioning and really hating myself, and I found your show… I found Noah’s Ark, and that’s the same way I felt when I found Blackbird. … I’ve decided that the further you push the envelope, the harder you push it–there’s always going to be push back, but if you push it so far, it’s never going to push all the way back again.

On process of getting green-lit and his advice for budding filmmakers:

After many years of trying, the last bit was fairly simple. It was one producer, who had money, and was looking for a film. Someone I’d worked with called me and said do you have something [of this nature], I had Blackbird, she gave it to him, and he liked it.

That part of it was pretty easy because normally you have to gather multiple investors … but this time it’s one person, writing the check, so that part was easy.

Getting Isaiah and Mo’Nique … I’m learning. It’s sort of a new experience for me as well. I’ve been doing this a long time, but not with actors of that notoriety before. … I’m used to doing films that the mainstream doesn’t know about … so it’s a new day.

The first thing I always tell people is to train and study. You have to learn the basics. It doesn’t have to be expensive film school. Do what you can, whether it’s film books or community college. All you need is instruction and access to equipment. The beautiful thing about the industry now is that the technology is so affordable. You could shoot something on your iPhone that looks good enough to put on YouTube and get millions of views. It’s become a lot easier to do than what I started with 15 years ago with Punks, where everything was shot on 35 mm, and you had to pay for processing and all of that. Now you can buy a video camera, relatively cheap, that’s good and make it yourself. Learn the ropes and do good work.

You also have to be able to think laterally because this business is all about barriers… it’s not easy. I don’t care how successful you get, it never becomes easy, especially when your skin is brown. No cannot be an option. When you hit a wall, go left or right.

Above all else, you must have a firm belief in what you want to do and your ability to do it. You will hear ‘No,’ every day. … When I said I wanted to be a filmmaker, I could tell that people in my family didn’t necessarily believe that’d I’d make it, but it didn’t matter. I believed it, and I knew it was going to happen one way or another. And that’s how I continue to approach my career. … No can never be an option. … Tell me ‘No,’ and I’ll show you I can. It’s just that simple.