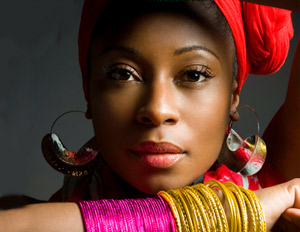 Every time you witness the moves of award-wining choreographer Fatima Robinson–who is the mastermind behind routines for pop phenoms like The Black Eyed Peas (concerts and Superbowl halftime shows), Gwen Stefani (peep her work in the L’Oreal commercial), and the late King of Pop Michael Jackson “Remember the Time”)–you see another brilliant example of the myriad talent hip-hop has birthed for worldwide influence. From her humble roots on the streets and dance floors of New York to the concert stages (the recent Billboard Awards) and silver screens (she choreographed for the Oscar-winning Dreamgirls), Robinson, who also serves as creative director for the Black Eyed Peas, has been strategic with every syncopated step.

As part of our continuing coverage of the business of music in celebration of Black Music Month, BlackEnterprise.com chatted with the lean dancing machine in-between rehearsals about infiltrating Hollywood on the big and small screens, reinventing herself and the truth about her and Common‘s “romance.â€

As always, you’ve been busy–most recently with the Billboard Awards. What’s new?

Yes, I have, and working everyday. I’m in New York now working with the Black Eyed Peas for their Central Park charity concert for 20,000 people. Also, I just finished choreographing for a TV pilot called The Playboy Club on NBC. It was interesting to look at women in the sixties who were beginning to transition from their roles as housewives by working in clubs and earning money. It was an interesting dynamic to play with [in dance].

What has your journey been like in this business?

I’ve been choreographing for 20 years, but I started dancing in clubs and dance contests similar to shows like So You Think You Can Dance? I also did videos with Heavy D, Big Daddy Kane, Bobby Brown and others.

Did you always know that this is what you wanted to do?

No, dancing was a hobby that I enjoyed and I had no idea I could make a career out of this. I was at the right place at the right time when I met John Singleton and he made me an extra in Boyz N the Hood (I was in the BBQ scene). From there my career began to [take off] and I was doing Gap commercials and putting together stage shows for anyone I was dancing for like Mary J. Blige, Will Smith, Aaliyah, Brandy, Keith Sweat, Guy and Bobby Brown. But it was my work with The Backstreet Boys that introduced me to pop and really taught me how to put together a stage show. After I got started I [enrolled] in acting and directing classes to learn techniques that would later help me improve my choreography.

Where did you study?

I have never taken traditional dance classes like ballet or jazz. I studied African and belly dance classes as well as different styles in various cultures that would be their equivalent of street dance. I’ve always said that the club was my classroom, including dancehall clubs in Jamaica. Nowadays, as a mom of a [10-year-old] son, I have younger assistants who go out to the clubs and keep me [abreast] of what the new dances are.

What’s your role as the creative director for the Black Eye Peas?

My role is to serve as the point person to each department, including hair, makeup, wardrobe, lighting and staging to set the overall tone of the whole show. Of course, I collaborate with Will[.i.am.]. The funny thing is, I met him years ago in a club and he said to me then, “I’m going to work with you one day.” And he gets it because he grew up freestyle dancing in some of the same clubs I did, so we work well together.

How are you crucial to the success of your artist?

I like pulling out what that person has naturally. I love when I can see a growth in that person that they didn’t know they had. So I like to think that I’m pushing them forward to make them grow.