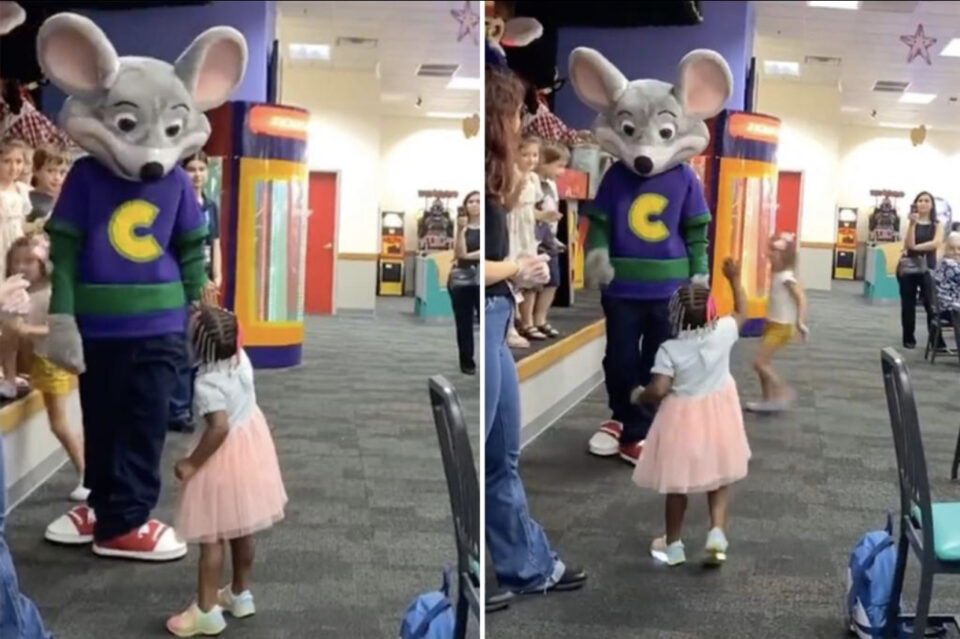 A mother from New Jersey is disgusted by the treatment her daughter received from a Chuck E. Cheese character.

According to the NY Post, the disturbed mother took to Twitter to share her two-year-old’s experience, claiming that she was racially discriminated against by the restaurant’s mascot.

The video shows the mouse character initially greeting and high-fiving a group of white kids that were standing on a stage, but then it skipped the little Black girl as she was seen dancing around him on the floor level.

“On July 30 at Chuck E Cheese in Wayne, NJ, my 2yo was racially discriminated against. As you can see, he gives all of the yt kids hi-5s & PURPOSELY ignored my black baby,” user belllahijabi wrote in the post that has since garnered nearly 30,000 retweets and over 80,000 likes. “When confronted, he ignored me as well.”

PLEASE RETWEET‼️ On July 30 at Chuck E Cheese in Wayne, NJ, my 2yo was racially discriminated against. As you can see, he gives all of the yt kids hi-5s & PURPOSELY ignored my black baby. When confronted, he ignored me as well. The manager, Angie Valasquez, made excuses for him.. pic.twitter.com/QMmE3wmti1

According to the mother, she also confronted the restaurant manager, who  “made excuses” for the mascot’s behavior, so she’s pleading for the video to go viral.

Saying she’s “sorry I feel that way” but he didn’t see her, even after showing her the PROOF in the video. Please make this go viral like y’all did with that “co-wife” tweet! This is getting out of hand!!!

The comments are split about why the mother’s two-year-old was seemingly ignored. One wave of users stand in solidarity with her as they echoed her belief that the mascot saw her and deliberately ignored her.

He saw your sweet baby (and so did the other staff). pic.twitter.com/ZJL99Msaii

At first I thought *mayyyybe* the person in the costume could only see the kids on stage more at eye level. Then they *CLEARLY* looked down at baby girl. Whole costumed head bent downwards. They saw her. Despicable.

Another wave of users spoke from experience, claiming that the costume head is difficult to see through.

You guys have to understand that these costumes BARELY have any opening for vision. He most likely didn’t even notice the child… I know from experience…

As a tenured Chuck E Cheese, I can say in all seriousness, there are many blind spots with this head. I have missed seeing children, I have stepped on kids, I have fallen into the pizza buffet, and even fell into the ball pit. I’m hopeful this is the case here as well.

The released footage comes after an incident in which multiple costumed characters at a Sesame Place-themed amusement park ignored a 5-year-old Black girl, BLACK ENTERPRISE previously reported. The Baltimore family is suing the park for $25 million.