Black Unemployment Above 10 Percent for Last Half Century 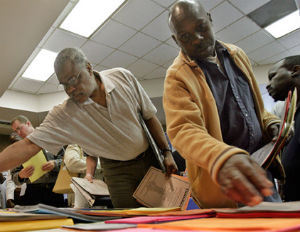 Friday’s jobs numbers showed unemployment for the U.S. at 7.9 percent – still at crisis levels but lower than the jobless rate has been since 2009. But that number would be a historic lowÂ for blacks: joblessness among African Americans has been north of 10 percent for the last half century, reports ThinkProgress.

The larger story, though, is that high black unemployment is a structural problem that has resulted from centuries of less access to education and higher-paying jobs. Sixty years after the Supreme Court officially desegregated AmericanÂ schools, they remain largely segregated along racial and economic lines. Students from low-income, low-education backgrounds, more likely to be black, are less likely to go to college; even high-achieving students at low-income schools are less likely to attend college than similar students at high-income schools. And black students are more likely to fall on the wrong side of the growing education gap between the rich and the poor.

That has created a cycle of rising income inequality that was only exacerbated by the recession, when the wealth gap between black and white families doubled (blacks were twice as likely to have been hit by the housing crisis as whites, thanks in part to discriminatory lending policies). Declining unionization rates are more likely to hurt black workers, and cuts to all sorts of social programs, from public transportation to the safety net, have made it harder for black workers to participate fully in the economy.

Black unemployment topped out at 16.7 percent during the recession.