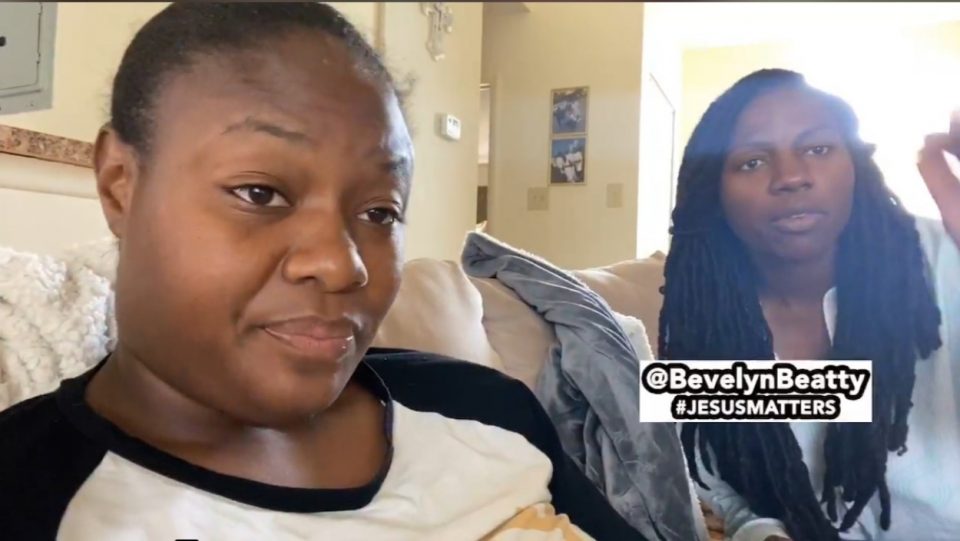 Over the weekend, two Black women from New York City were caught on camera defacing the Black Lives Matter mural that was painted on Fifth Avenue as well as murals in Brooklyn and Harlem. The two women who were charged with splashing paint over the Black Lives Matter murals have been identified as “attention-seeking anti-abortion protesters” known for similar stunts, according to The New York Daily News.

The two women were arrested Saturday afternoon. They have been identified as Edmee Chavannes, 39, and Bevelyn Beatty, 29. They live together in Staten Island, New York. Both were taken into custody and charged with criminal mischief.

On Sunday afternoon, Beatty, went on her Facebook Live to give an update on her antics. In the video, they are defending the police and implying they took care of them, although they claim they don’t want to get the police officers in trouble. Also laying claim that Black Lives Matter hates Black men and many other accusations to try to sully the purpose of the movement.

The Black Lives Matter murals on Seventh Ave. and West 125th St. in Harlem, and on Fulton St. in Bedford-Stuyvesant in Brooklyn were also vandalized by the pair. It was also discovered that the duo was arrested last month for protesting outside a Planned Parenthood headquarters based in New York. They were also charged with disorderly conduct when they disrupted a council meeting in a suburb of Fort Myers, Florida.
The two women are Trump supporters who have posted the videos of the vandalism they committed on the BLM murals.
This statement was posted to Beatty’s Facebook page:
***Official Statement & Update on Bevelyn & Edmee***
Bevelyn and Edmee are officially released from the NYPD.
They are doing wonderful and thank each and every one of you for your overwhelmingly incredible support and prayers!
A few things they want to make clear to the public…
#1) The police officer that slipped and fell in the paint is doing OKAY! Praise God! He had a hard fall but is doing very well and fine.
#2) While they were detained, Bevelyn and Edmee were treated like royalty! This was the BEST experience they have ever had with any police department.
#3) During their time with the NYPD, the Lord moved mightily. The police expressed their HIGH APPRECIATION for what Bevelyn and Edmee stood up for today. They expressed their concerns and fears for their city. They are in fear for the sake of NYC and voiced that they need MORE people like them to help and stand up for what is RIGHT! They even asked for PRAYER!!
God is SO SO good and just.
More to come…
But we are taking our country back NOW!
#JesusMatters
#GodBlessBlue
#RiseUp