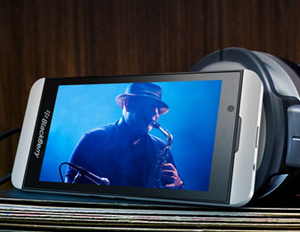 Blackberry, which was known as Research in Motion, announced a new operating system and a fresh line of phones on Wednesday. The company’s CEO Thorsten Heins took the stage to unveil the global launch of the new BlackBerry 10 operating system and two new smartphone devices: the full touch screen Z10 and the fan-favorite full-QWERTY keyboard Q10. The announcement didn’t stop at the new features with BlackBerry recognizing Alicia Keys, the newly-appointed global creative director for the brand. The R&B songstress wasn’t mum about ditching the platform for a more a sleeker phone, but she’s back. Here, we breakdown why you may want to get back on the “Crackberryâ€ BlackBerry bandwagon as well:

The BlackBerry Z10 was the focus of the announcement. Heins showed off all the device’s specs, which include a 4.2-inch 720p resolution display, a 1.5GHz dual-core processor, and 16GB of internal storage with microSD storage expansion, as well as 2mp front-facing camera with an 8mp rear camera capable of shooting in HD.

BlackBerry’s chief executive stated that the company received a huge number of requests from BlackBerry fans to continue making a physical keyboard device, so while few specs were announced, BlackBerry will also produce and ship the Q10 which has a full 3.1-inch touch screen, in addition to the very familiar BlackBerry QWERTY keyboard.

The company behind the former market-leading phone spared no expense in developing a top-notch virtual keyboard to compete with the likes of Apple and Google. It employs a new kind of predictive-text functionality that not only predicts words over the actual letters you are typing, but also utilizes gestures that let you “flick” predicted words to the text field. Other keyboard gestures let users quickly delete words, add numbers, and change languages.

BlackBerry Flow is a gesture-based methodology ofÂ easily viewing and managing contentÂ without completely leaving your current screen.Â Flow also gives users quick access to other applications with no pause in the operation of current screens. Apps don’t have to re-open or reload as you use gestures to access them.

BlackBerry Hub allows users to easily access notifications such as text messages, IMs, emails and OS alerts). Social networking is deeply integrated within the Hub, too, allowing users to connect their Twitter, Facebook, and LinkedIn profiles. Â The accessibility provides quick access and control of notifications without making users visit the actual app.Â Finally, BlackBerry is allowing users to experience “true multi-tasking” with the BlackBerry 10.

Bring Your Own Profile

For the corporate folk who don’t want to carry two phones, there’s BlackBerry Balance. This feature gives you “work” and “personal” profiles, allowing you to toggle between enterprise and personal accounts, apps, and content by using, you guessed it, gestures.

Corporate IT can easily manage the work profile and not mess with your personal data. Users don’t have to worry about sharing sensitive work data after hours.

BlackBerry claims to have worked closely with developers and has assured users that the “top-tier” apps will be along for the ride. Apps like Skype, Foursquare Rdio, WebEx, Wall Street Journal, Kindle…and Angry Birds will be ready for launch. Time will tell if more high-end developers will add BlackBerry 10 to their road map.

The BlackBerry 10 experience can definitely compete with the popular iPhone and Samsung Galaxy S3 in the productivity category–neither of which have a more seamless user experience than what BlackBerry has just announced.

The BlackBerry Z10 will be available on all major US carriers mid-March for $199 (on contract).

But did BlackBerry take too long to get folks to switch from other platforms? Let us know what you think in the comments section.