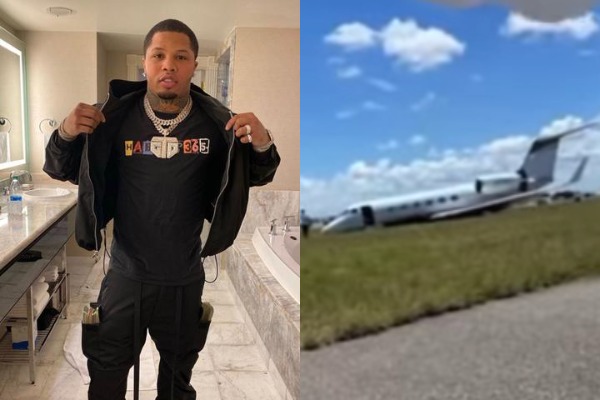 Davis was aboard a private plane that crashed after takeoff on Saturday, Insider reports. The Baltimore native was one of no more than 10 passengers who, thankfully, all emerged unscathed from the wreckage.

The small private jet made an emergency landing at Fort Lauderdale airport shortly after leaving the tarmac. Davis and his crew were headed back to Las Vegas when landing gear damage reportedly affected the plane’s steering, Boxing Scene said.

“The plane crashed,” Davis said on Instagram Live. “The plane didn’t even take off. It took off… but it didn’t take off. I’m good, but it just my ass hot. I’m sitting on this hot-ass concrete.”

After surviving what could have been a fatal accident, Davis says he’s done flying private.

“For everyone wanting to fly private, I think that’s over for that,” Davis said. “I’ll be … I’m driving or catch a train.”

He made sure to let his concerned followers know that, “Everything good, though. We good.”

City fire trucks were on the scene to assess the damage though there were no reported injuries. A member of Davis’ group said the pilot ‘had no control of the plane. That sh*t is God, yo.”

The pilot was able to land the plane that lost its front wheel after enduring the minor crash.

“It’s not the pilot. The pilot that was flying… he probably felt the hydraulics while they were [taxiing for takeoff], then got in the air and he hurried it up to put it down,” theorized Davis. “And that’s when [it went down]. But he did good, though. We could’ve been over there.”

Davis was headed to Vegas to watch the super fight between Manny Pacquiao and the welterweight champion Yordenis Ugas. Ugas ended up beating Pacquiao and retaining his WBA title following a 12-round decision.