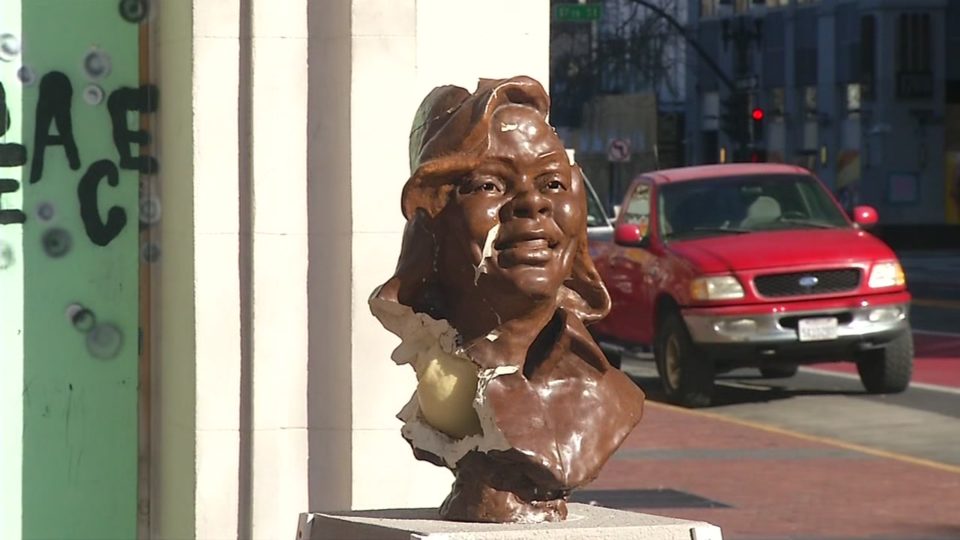 A bust of Breonna Taylor in Oakland was vandalized over the weekend. (Image: Youtube/ABC7 News Bay Area)

A bust of Breonna Taylor erected in her memory in Oakland, CA, was found vandalized and smashed Saturday morning.

The bust of a smiling Taylor, which was installed near City Hall, sat on top of a base with “Say her name: Breonna Taylor,” written on it. Two weeks after the sculpture debuted, it was found in pieces. Parts of the back and side of the bust were missing and parts of Taylor’s face were chipped.

The Oakland Police Department told CNN it is investigating the matter but said it has no suspects or a motive for the act. Leo Carson, the artist behind the bust, said he found out what happened when a follower on Instagram sent him an image of the damaged bust.

Carson told CNN the sculpture was created to “uplift and embolden protesters” in Oakland to fight racism and injustice. Carson added that he considered damaging the bust “an act of racist aggression aimed at suppressing the fight for Black freedom.”

He plans to rebuild the bust in bronze to keep it from being damaged, according to The Huffington Post. A GoFundMe page created by Carson has raised  $13,700 as of Tuesday morning, more than double its $5,000 goal.

According to CBS San Francisco, Joe Cotchett of the law firm Cotchett, Pitre & McCarthy, LLP, said the firm would fund the restoration of the bust.

“It’s scandalous and outrageous that anybody would do such a thing,” Cotchett told CBS, explaining the vandalization of the sculpture angered him, particularly because Taylor was an emergency medical worker who was shot multiple times by Louisville, KY, police in her own home. “She was a wonderful human being … The whole situation is preposterous—first her death, and now this.”

Taylor and her boyfriend, Kenneth Walker, were asleep the night of March 13 when several Louisville Metro Police officers barged into her home with a no-knock warrant in relation to a drug investigation. The noise woke Taylor, who believed someone was trying to break in. Walker, a registered gun owner, fired a shot toward their bedroom door.

The police responded, firing a bevy of shots toward the couple and hitting Taylor five times.

Although four officers fired into Taylor’s home, Detective Brett Hankison was the only one charged. Two other officers, including the one who fired the fatal shot, were not charged.